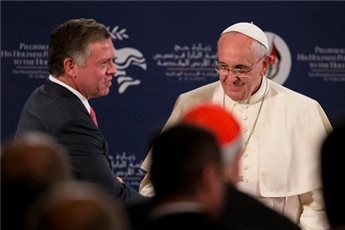 Pope Francis embarked upon a three-day pilgrimage to the Middle East, Saturday, with a plea for peace in war-torn Syria, calling for people to uphold religious freedom ‘in a region ravaged by war and bloodshed, and where a dwindling Christian population faces daily persecution’, according to Ma’an News Agency.
Syria’s civil war, which began in 2011, is estimated to have claimed at least 162,000 lives and forced another 2.7 million people to flee to neighboring countries, 450,000 of them Christians.

Ma’an reports that Francis, a.k.a. Jorge Mario Bergoglio, stepped off his plane onto a red carpet at Amman airport, in Jordan, where he was greeted by officials and two children dressed in traditional costume and brandishing bouquets of irises, the national flower of Jordan.

The three-day tour, deemed a ‘pilgrimage of prayer,’ includes a trip to Israel and the Palestinian territories, on what is Francis’ first visit to the Middle East, with an official aim of ‘boosting ties with Muslims and Jews, as well as easing an age-old rift within Christianity’, according to Ma’an:

Authorities issued restraining orders, this week, against just over a dozen Jewish Israeli nationals under suspicion of potential threats to the sanctity of the Pope’s journey, following a string of hate attacks on Christian sites.

Israeli vandals are responsible for dozens of attacks against churches, mosques and graveyards in different parts of Palestine.

Israel has also recently begun a campaign to recruit its remaining Christian population into its army by attempting to divide them from the Muslim community, going so far as to designate and promote them as a different race entirely from Arabs, as well as altering identification cards to reflect their Christian status.

The campaign has been met with harsh criticism by the Christian commmunity at large.

Israel’s Palestinian community, which makes up some 20 percent of the population, are the descendants of the 160,000 Palestinians who remained on their land after the majority of the Palestinian population was forcibly displaced by Jewish militias during the creation of Israel in 1948.

Also of concern to the religious community worldwide, the Ministry of Foreign Affairs has reportedly sought to transfer the sovereignty over the Maqam of the Prophet Dawud from occupied Jerusalem to the Vatican, during the Pope’s visit to the Levant, according to so-called ‘Headquarter to Save Tomb of Dawud’.

Zion Evrony, Israel’s ambassador to the Vatican, has denied this claim, saying that ‘contrary to rumors in Israel, there is no intention to transfer to the Vatican sovereignty or ownership on the Tomb of David or the Cenacle’, in a recent speech obtained by Ma’an.

The Cenacle is reputedly the site of Jesus’ last supper, and Pope Francis plans to hold mass at the Old City site, on Mount Zion, as part of his travel itinerary.

See related IMEMC story, below: ‘US Bishops ask Pope to speak about injustice against the Palestinian Children’