Increase in Israeli Violations Against Holy Sites in oPt 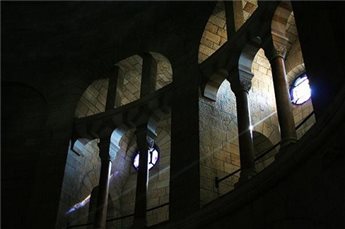 A recent rights report has warned against escalating violations of both Israeli authorities and settlers against Islamic and Christian holy shrines in Palestine, amounting to 525 over the past five years.According to Al Ray, “The Settlers’ Violence & Violations against The Islamic & Christian Holy Shrines in the Occupied Palestinian Territories” report was issued in Arabic by Vienna-based ‘Friends of Humanity International’ organization, Gaza-based Center for Political and Development Studies (CPDS), and the Beirut-based Palestinian Association for Human Rights “Witness”.

The report highlights the organizations in question, their means, their sponsors and implications, as well as the extent to which Israel as an occupying power is committed to protecting pilgrims to Islamic shrines.

Additionally, the report stated that the violations took place almost daily, ranging from closure of places of worship, arson of mosques and churches, depriving the Palestinians of the right of access to places of worship, vandalism and destruction of property, physical assault, verbal abuse, threats and racist graffiti.

Details of the report can be viewed at Al Ray.

Just today, Israeli nationalist organizations called for a march through Al Aqsa Mosque Compound, according to the Waqf Foundation in charge of the compund.

Thousands of Israeli Jews would attend, and police would close down roads in occupied East Jerusalem during the march.

Al-Aqsa is located in East Jerusalem, a part of the internationally recognized Palestinian territories which have been occupied by the Israeli military since 1967. It is the target of frequent attacks by settlers and soldiers alike, with violations ever increasing.

Also in Jerusalem, an unidentified arsonist started a fire in Dormition Abbey church, late Monday, near the Old City of Jerusalem, a bishop told Ma’an, noting that the attack took place just following a mass the Pope had conducted there, earlier in the day, the last of his official visit.

‘Someone entered the church and went down to the crypt, took a book that is used by pilgrims to a small room next to the organ, and set some wood crosses on fire,’ the Benedictine Abbot of the church, Nikodemus Schnabel, told AFP.

The church has also been subjected to attacks in the past, according to Ma’an. In 2013, suspected Jewish vandals sprayed ‘Christians are monkeys’ and ‘price tag’ on the walls and slashed the tires of cars around the church.

The Israeli police said they were investigating the fire.

A small fire also broke out in the Church of the Nativity in Bethlehem, on Tuesday, but Father Ibrahim Faltas, economist of the Custody of the Holy Land, told Ma’an that a candle holder accidentally fell causing a curtain to light on fire.

He said the that fire caused minor damage to the Grotto of the Nativity.