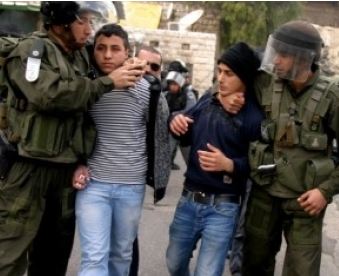 [Wednesday, May 28, 2014] Israeli soldiers invaded different parts of the occupied West Bank, and occupied East Jerusalem, kidnapping at least 22 Palestinians.
Local sources in Jerusalem stated that the soldiers invaded the al-Ezariyya town, east of occupied Jerusalem, and kidnapped twelve Palestinians, including one woman.Hani Halabiyya, spokesperson of the Popular Committee Against the Wall and Settlements in Jerusalem, told the WAFA Palestine News Agency that at least 25 Israeli military jeeps invaded the town, and broke into dozens of homes before kidnapping the twelve Palestinians.

Israel repeatedly arrests family members, including wives, mothers and sisters of sought Palestinian activists in an attempt to oblige them to surrender.

A central massive protest is scheduled to be conducted this coming Friday in occupied Jerusalem following Friday prayers at the al-Aqsa Mosque.

In addition, one Palestinian identified as Jom’a Adnan Mousa, 17, suffered fractures and bruises after being assaulted by soldiers manning the al-Jalama roadblock, northeast of Jenin.

In Hebron, in the southern part of the West Bank, soldiers kidnapped Yousef Gheith, and Shaher al-Qawasma, while a third Palestinian, identified as Bajes ad-Dababsa, was kidnapped in Yatta nearby town.

The soldiers also invaded various neighborhoods in Hebron city, and installed roadblocks at the entrances of Sair town, north of Hebron, Doura and ath-Thaheriyya towns, south of Hebron, and the Halhoul Bridge, north of Hebron, stopped and searched dozens of cars and inspected the ID cards of the passengers.

In Bethlehem, soldiers invaded the Aida refugee camp, north of the city, broke into at least one home and kidnapped one Palestinian identified as Akram Khader Abu Khdeir, 19.