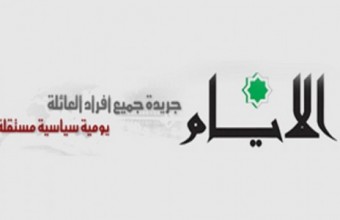 Israeli soldiers raided the offices of al-Ayam Palestinian newspaper in Ramallah, managers said, where they rummaged through the contents of the building and ordered them to stop printing three Hamas publications.’Officers informed us that Israel would not allow the printing and distribution of Falastin, Al-Resala, and Al-Istiqlal,’ the managers said in a statement.

According to the Palestinian News Network (PNN), the military captain said to the newspaper’s administration that Israeli authorities will not allow hard copy newspapers such as these to write against Israel.

The statement from al-Ayam also said that the soldiers threatened to take ‘concrete steps’ towards stopping the publications from being printed at al-Ayam offices.

The military has yet to make an official comment about the incident.

The three papers have been in publication by al-Ayam since April, when an unexpected reconciliation deal between Hamas and rival party Fatah brought the publications back to West Bank newsstands.

Ma’an reports that, on April 23, Hamas and the PLO — which Fatah dominates — revealed a reconciliation deal under which they would work together to form a new government of political independents.

Israel said it would not negotiate with any Palestinian government backed by Hamas, effectively putting an end to the latest round of US-brokered peace talks.

Earlier this month, Ma’an further reports, Al-Quds, another West Bank daily, became available again in Gaza for the first time since Hamas drove Fatah out of the territory during a week of bloody fighting in 2007.