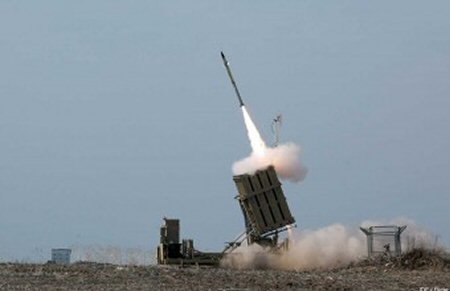 Prize winning Israeli defense and aerospace engineering expert Dr. Moti Shefer stated, during a recent interview with Radio 103, that the infamous Israeli ‘Iron Dome’ security system was one of the biggest bluffs that he’d ever seen.Palestinian rockets, though defenseless, are believed to be a desparate means used by the resistance movements in Gaza to respond to the Israeli aggression, according to a recent report by Al Ray Palestinian Media Agency.

So far, mainstream media has reported no fatalities caused by home-made rockets fired by Palestinian resistance. In addition, the harm inflicted by these rockets, upon Israel’s colonial settler community, amounts to only a dozen or so cases of mild injury and panic.

The rising death toll of Palestinian residents of the Gaza Strip runs parallel to reports of well over 200 civilian houses being bombed and completely or near-completely destroyed, as of the time of this report, with Al Ray’s latest reported incident occuring in the Al-Shate’ refugee camp, west of Gaza City.

Dr. Shefer was recently quoted by Israeli media as saying:

‘There is no missile in the world today able to intercept missiles or rockets. Iron Dome is a sound and light show that is intercepting only Israeli public opinion, and itself, of course. Actually, all the explosions you see in the sky are self explosions. No Iron Dome missile has ever collided with a single rocket. Open spaces are a myth invented in order to up Iron Dome’s current interception percentages. The rockets announced as intercepted by Iron Dome either never reach the ground, or are virtual rockets invented and destroyed on the Iron Dome control computer. To this day, no one has ever seen an intercepted rocket fall to the ground.

‘What lands here is what’s launched. The parts we see on the ground are from Iron Dome itself. We’re shooting at ourselves, mainly virtually. The virtual rocket was invented in order to increase the vagueness surrounding Iron Dome. Assume that a real rocket arrives. What does the command and control system do? It creates nine more virtual rockets, and transmits their paths on computer graphics to the rocket launcher operators. The launcher operators see 10 rockets and launch 10 Iron Dome interceptors. People hear 10 booms, one rocket enters, and you get a 90% success rate.’

According to Dr. Shefer, the ‘Iron Dome’ system is but a component of a widespread conspiracy, in which two interested parties afraid of peace are participating: the defense industries and Prime Minister Benjamin Netanyahu, Al Ray further reports.