At Least 25 Civilians, Children, Killed By Israeli Missiles In Gaza 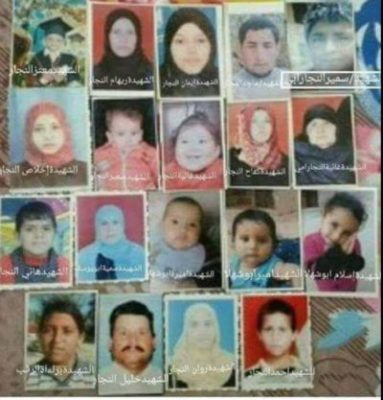 update: A new airstrike in Rafah around 8:30 pm Tuesday killed two and wounded three. The Palestinian Health Ministry reports 192 killed, and hundreds more injured since Monday. Most of these are still waiting to be identified. Reports continue to roll in of new airstrikes and naval artillery shelling, ongoing in all part of Gaza.The victims were identified as:

Karam Abu Zeid, a baby of less than one year old, died Tuesday evening of wounds sustained in the Israeli bombardment of his home on Monday, which killed most of his family.

Palestinian medical sources in the Gaza Strip have reported that more than twenty-two Palestinians have been killed, and dozens injured, in recent Israeli air strikes and bombardment, in different parts of the Gaza Strip. Army fires missile into UNRWA car, killing a Palestinian Doctor and his brother.

Update 18:40: A Palestinian doctor and his brother killed after the Israeli army fired a missile into a UNRWA car, in northern Gaza.

The Ministry of Health said the two slain Palestinian have been identified as:

The sources said two Palestinians were killed by Israeli missiles, east of Rafah, in the southern part of the Gaza Strip. They have been identified as:

A Palestinian journalist and his daughter were also killed after an Israeli was fired into a crowded street in Mesbeh neighborhood, north of Rafah.

Several Palestinians were injured, some seriously. The slain father and his daughter have been identified as:

A Palestinian child was also killed when an Israeli missile struck her family home in the Salatin neighborhood, in northern Gaza; several family members were injured. She has been identified as:

The Ministry of Health in Gaza also said two children (brothers) have been killed after an Israeli missile struck their home in Khan Younis. They have been identified as:

The soldiers also killed Abdullah Fawzi Najjar, a member of the al-Qassam Brigades,  when the Israeli war jets fired missiles at a tunnel, on July 29th, 2014.

In addition, a political leader of the Democratic Front for the Liberation of Palestine (DFLP), and six members of his family, have been killed when the army fired a missile into their home, in Khan Younis. The names of his family members were not yet available at the time of this report.

Soldiers also fired missiles into dozens of homes, north of Gaza City, Zeitoun neighborhood, Rafah, Beit Lahia and Jabalia in the northern part of the Gaza Strip, killing and wounding dozens of Palestinians.

The Ministry of Health in Gaza said the remains of more than a 100 Palestinians are yet to be identified, and published. Israeli missiles and shells have killed at least fifty Palestinians Tuesday.