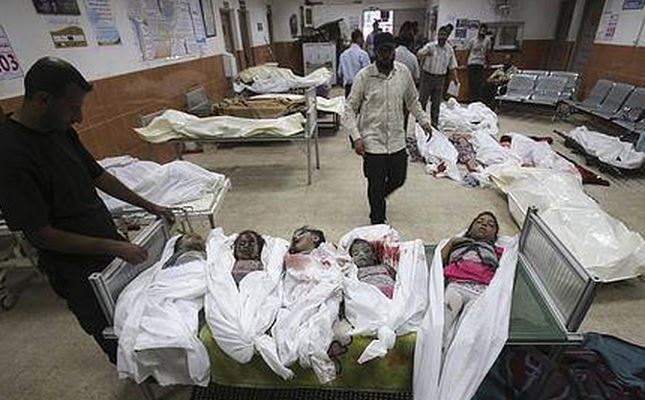 The Media Office of the Islamic Resistance Movement, Hamas, issued a press release accusing Israel of repeatedly violating the 72-hour ceasefire, shortly after it started, an issue which pushed armed resistance groups to retaliate, and clash with invading soldiers.It said Hamas holds Israel fully responsible for these violations, and all events that took place afterwards, adding that the Israeli military committed the following violations that “required retaliation from the resistance in Gaza”:

1. The army, several tanks and armored vehicles, invaded Rafah earlier on Friday morning, advancing more than 2400 meters; the resistance exchanged fire with the invading vehicles and soldiers. The clashes continued until after the temporary ceasefire started.

2. Israeli military tanks and armored vehicles invaded various areas, east of the Gaza Strip, mainly in Beit Hanoun, Sheja’eyya and Rafah, and demolished several Palestinian homes under the guise of searching for tunnels. Army sharpshooters were also deployed on rooftops of Palestinian homes and opened fire at the Palestinians who were trying to reach their homes.

3. The Israeli military committed an ugly massacre in Rafah by shelling and bombarding it is from various directions, including aerial strikes.

It added that it holds Israel fully responsible for violating this temporary humanitarian truce, and for continuing to commit massacres against the Palestinian people.

At the end of its statement, Hamas said it would be committed to the truce, as long as Israel respects it, and ceases to violate its own commitments.