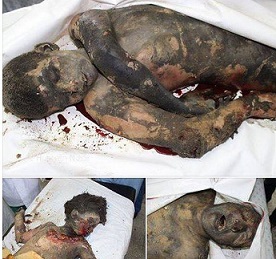 The Israeli military continued its bombardment and shelling of densely populated civilian area, and homes, in the Gaza Strip, killing nine members of one family, and six members of another family bringing the death toll, just from dawn to early morning Sunday to at least 25 Palestinians.Update: 09:59 The Ministry of Health in Gaza said three more members of Khattab family have died of serious injuries after the army bombarded their home. At least 40 family members were injured.

The Khattab family members who died of their wounds have been identified as:

Medical sources in Rafah, in the southern part of the Gaza Strip, have reported that the army fired a missile into a home belonging to al-Ghoul family in Rafah, killing nine, including children.

The army also fired a missile into a home belonging to al-Khattab family members, killing at least four Palestinians, and wounding more 20, while rescue operations are ongoing, as more Palestinians are believed to have been buried under the rubble. Three of the slain Palestinians have been identified as: