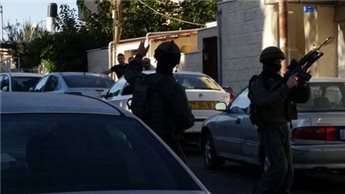 A number of Israeli police units have deployed across occupied East Jerusalem, today, following two incidents in which one Israeli civilian was killed and a soldier seriously injured.Israeli police have shot and killed Mohammad Nayef Ja’abeess, who rammed an industrial digger into a bus in Sheikh Jarrah, occupied Jerusalem.

‘A 25-year-old man was run over by the excavator and killed, and the bus driver was moderately to lightly injured,’ emergency services spokesman Zaki Heller told AFP, who said that an additional four people were also lightly injured during the incident.

A video capture of the incident seems to reveal that police opened fire at the excavator before it knocked the bus over.

Later, according to Ma’an, an unidentified gunman opened fire at an Israeli soldier near the Hebrew University, also in occupied East Jerusalem.

The soldier, in his 20s, was said to have been seriously wounded and subsequently taken to a local hospital for treatment.

Undercover units and special forces deployed in Wadi al-Joz, Sheikh Jarrah and al-Suwanna following the incident, in which they stopped and searched motorbikes and private vehicles.

East Jerusalem is a part of the internationally recognized Palestinian territories, illegally occupied by Israel since 1967.