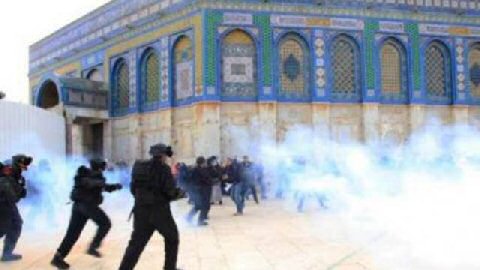 On Sunday night three young men were seriously injured by live ammunition in clashes with Israeli soldiers in the Hebron-area town of Seir, in the West Bank. According to reports from the Red Crescent, the men were hit in the lower limbs after Israeli forces fired live bullets on protesters. The three were transferred to hospitals in Hebron for emergency medical treatment.

Near Kiryat Arba, an Israeli settlement to the east of Hebron, Israeli military forces imposed a curfew this morning in neighbouring Palestinian areas to prevent disturbances during the funeral of a soldier from the settlement, who was killed in clashes with local resistance.

Israeli forces raided additional towns in the West Bank and detained Palestinians alleged to have been involved in violent clashes. Early this morning, two residents of the town of Qabatiya, south of Jenin, were arrested and taken to an unknown location. In similar raids, two young men were taken from their homes in the Aida refugee camp in the north of Bethlehem.

Meanwhile, large demonstrations have been held throughout the world to strongly condemn Israel’s relentless attacks on the Gaza Strip.

See orginal article for details and links of interest.

Operation Protective Edge has now killed more than 1,800 Palestinians and despite a unilaterally declared ceasefire for several hours on Monday, Israeli forces have reportedly continued their strikes on the coastal area.