MoH: ‘In the Name of Humanity, Stop the Israeli Slaughter of Innocents in Gaza’ 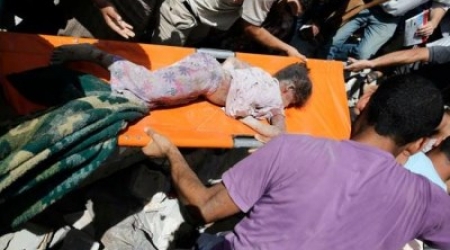 The Ministry of Health Gaza condemns in the strongest possible terms the Israeli breaking of the humanitarian ceasefire in a murderous attack on the Al-Bakri family home in Al-Shaati refugee camp in west Gaza City, killing an eight-year-old child and injuring 30 other people, mostly women and children.

This attack on a home in one of the most densely populated residential areas on earth only minutes after the commencement of a humanitarian ceasefire can only be seen as a calculated and deliberate attack on civilians.

This attack in breach of all legal and humanitarian law can only be seen as yet another example of the complete contempt and disdain in which the Israeli authorities hold all standards of civilised behaviour, organisations and instruments of international law, and humanity itself.

This attack comes amid the ongoing massacre in Rafah in which at least 170 have already lost their lives, as the death toll continues to rise.

Since July 7 more than 1,800 Gazans have been killed and almost 10,000 injured, the vast majority of them women, children and the elderly.

Its own actions in the past four weeks have stripped the thin mask of civility from the Israeli face, and revealed its abject savagery to the world.

In the name of humanity, the Ministry of Health Gaza demands that the international community act immediately to end the slaughter of innocents in Gaza, and hold the Israeli war criminals to account.