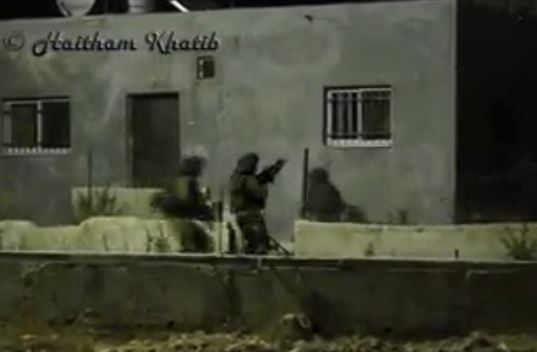 Israeli soldiers invaded various Palestinian communities in the occupied West Bank, and kidnapped nine Palestinians, six of them in Hebron. Scores of Palestinians have been hurt by Israeli fire and gas bombs, and dozens of homes ransacked.Local sources in Hebron, in the southern part of the West Bank, have reported that the soldiers kidnapped former political prisoner Ibrahim Fadel Jaber, Ahmad al-Jamal, and Abdullah Suleiman Abu Sneina, after violently breaking into their homes, and ransacking them.

It is worth mentioning that Jaber served 30 years of a life term under Israeli confinement, and was released under the Shalit Prisoner Swap Agreement in 2011.

Spokesperson of the Popular Committee against the Wall and Settlements in Beit Ummar nearby town, Mohammad Awad, has reported that the army invaded the home of Ahmad Mustafa, and violently searched it before kidnapping his son Ibrahim, 25.

Also in Beit Ummar, soldiers invaded a bakery in the ‘Asseeda area, forced it shut for one hour, and violently struck the owner, Salah Saleh al-‘Allami, with their guns and repeatedly punched him, before kidnapping a worker identified as Safwat Samir Ekhlayyel, 27.

Soldiers further invaded the home of Ibrahim Khaled Sabarna in Khallet el-Ein area, after smashing the front door, and handed his son a military warrant ordering him to head to the Gush Etzion military and security base for interrogation.

They also fired gas bombs at a number of homes in Beit Ummar, causing dozens of Palestinians to suffer the effects of tear gas inhalation.

Also in the Hebron district, soldiers invaded the towns of Ethna and Yatta, and installed several roadblocks at their entrances, and at the main entrances of the towns of Sa’ir and Halhoul, before stopping and searching dozens of cars, and interrogated several Palestinians while inspecting their ID cards.

In the northern West Bank district of Jenin, soldiers kidnapped a young Palestinian man, identified as Samer Hasan Jaradat, 29, from the Sielet al-Harethiyya town, after invading his family’s home and ransacking it.

Two Palestinians have been shot by Israeli live rounds in the Zababda town, near Jenin, while dozens suffered the effects of tear gas inhalation in the Zababda and Qabatia.

In addition, soldiers broke into the home of Mahmoud Ali Saleh in Jaba’ village, south of Jenin, and installed a roadblock at the entrance of the village.

It is worth mentioning that, on Tuesday at night, soldiers kidnapped a teenage girl, identified as Beirut Ali Mohammad, 17, and interrogated her at a nearby interrogation center for several hours before releasing her.

In Sanour village, south of Jenin, soldiers kidnapped Islam Jamal Abu Basma, 21, after invading his home, and handed two brothers, identified as Bader and Shaher al-‘Ayasa, military warrants ordering them to head to the Salem base for interrogation.

Another Palestinian identified as Haitham Mohammad Fadel, 29, in Baqa ash-Sharqiya village, north of the northern West Bank district of Tulkarem, and confiscated his cellphone and personal computer.