After 25 Years To Conceive First Child, Family Wiped Out By Israeli Missile 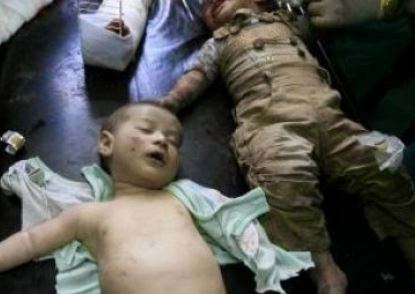 “Are you pregnant Suheila, really?” The husband asked his wife with the utmost joy and happiness. It had taken Ahmad an-Nairab, 67, and his wife Soheila 25 years of doctor visits, lab tests, and artificial insemination, until they finally had their first child, a child who brought joy and happiness to the family.

“25 years, 25 years, we will love this child more than life itself”, he said when baby Mohammad was born. As time passed, Mohammad started growing up, and went to school.

The mother then gave birth to a second child, Mahmoud, and a third, Mo’men.

The three children, their mother and father, became a happy joyous family, a heaven filled with children’s giggles and life, with the kids growing up loving their parents and appreciating life, and their parents loving their kids more than life itself.

Every year, the family celebrated their birthdays: 13 for Mohamad, 10 for Mahmoud, and 7 for Mo’men.

Now, their giggles and laughs, their vibrant and loving family has been silenced for ever.

An Israeli missile struck their home, and turned the family into mutilated remains, on the 27th day of the heavy Israeli bombardment of Palestinian homes in Gaza.

“This family is not just a number, they have been wiped out, their lives stolen from them, now the whole family is gone”, a relative told the Andalou News Agency.

“Ahmad couldn’t believe it when he became a father for the first time, 25 years after getting married, then the second and the third child”, the relative added, “They were a happy family, but Israel killed them in just seconds”.

A neighbor of the family said what happened to them is part of a larger Israeli policy of ethnic cleansing, adding that the parents loved their children, protected them from all harm, never allowed anything bad to happen to them.

Pointing at the rubble of the family home that once stood, the neighbor asked, “What did they do wrong?! Their house was a happy place, filled with laughs, toys and joy, what Israel did is an unbelievable, unimaginable extermination and ethnic cleansing of an entire family”.

Talking to the Andalou News Agency, spokesperson of the Ministry of health in Gaza, Dr. Ashraf al-Qodra, stated what Israel did is a war crime, an act that is “vicious and ugly”, part of Israel’s ongoing crimes against the entire Palestinian population.

“This family had dreams of a great future, a family that was so loving and caring, the parents were so happy to finally have three children after all of those years”, Dr. al-Qodra stated, “and in just a second, Israeli war jets assassinated their happiness, their future, their lives, this is a war crime”.

In its latest report, the Palestinian Ministry of Health in Gaza said 1886 Palestinians were killed by Israeli missiles and shells in the Gaza Strip since July 8, and around 9806 Palestinians have been injured, dozens seriously.