Al-Qassam: “No Ceasefire Without Adhering To Our Legitimate Demands” 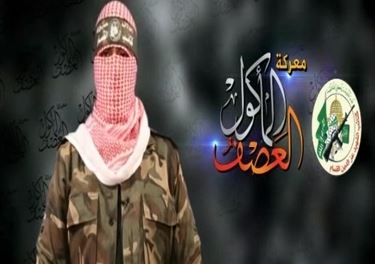 Video – On Thursday August 7: The al-Qassam Brigades, the armed wing of the Hamas movement, stated in a video published on August 7th, that any ceasefire and truce agreement that does not including accepting the legitimate basic Palestinian demands, including lifting the siege and establishing a port, will not be accepted by all armed resistance factions in the coastal region. The Brigades said that Israel’s military and political leaders are ongoing with their threats against the Palestinian people, their leadership and their resistance factions, while Israel “is ongoing with its crimes and massacres, and became accustomed to those crimes, bringing death and destruction”.

In the video statement, a representative of the al-Qassam Brigades stated:

But despite their lies and deceit about the bravery of their soldiers of the Givati and Nahal (Brigades), and their paratroopers, they failed to counter the heroes of the resistance, of al-Qassam and all armed groups”.

“They think they can continue to manipulate the people, to continue to violate international law, but they withdrew their army because they realized a ground invasion into Gaza is like sinking in quicksand… any decision to renew a ground invasion would be more soldiers killed, injured, captured and terrified…the weapons of their armored vehicles will become a joke the entire world over…”

“We affirm the following:

“First, we are ready for any upcoming battle, and will make the occupiers face difficult options. We will drag them into an extended battle, in which we will paralyze life in major Israeli cities, prevent all traffic in Ben Gurion Airport for long months, making them suffer very serious economic losses.

“Or we will drag them into an extended ground battle that would witness the end of their defeated army, we will inflict thousands of deaths on their soldiers, and hundreds of thousands of injuries, and we will capture prisoners of war, we will make their Mekava tank the joke of the century. Our resistance and people are ready to break the army of occupiers, and win the battle for liberation.

“Second, we will not accept to have this battle ended without a real end to the aggression in all its forms, and a real end to this siege, and the establishment of a port in Gaza. Anything else is a deceit and an attempt to negate the sacrifices of our great nation.

“Third, we strongly believe our demands do not need negotiations, they are humanitarian rights, basic rights, guaranteed by international law, and therefore, we call on the Palestinian negotiators not to accept any extension of ceasefire without achieving our legitimate demands.

“If our demands are met, we can extend the truce, then hold talks on details and technical issues, and if Israel refuses our demands, then we demand the Palestinian team to end its talks, and not to be part of Israel’s manipulation.

“The resistance, with God’s power and will, is capable of enforcing its demands, and the demands of our people.

God is Great. This is a Jihad, a victory of martyrdom – the Al-Qassam Brigades.