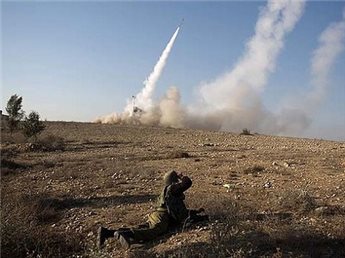 As the 72-hour temporary truce comes to an unsatisfactory end, with Israel failing to meet demands presented by negotiators in Cairo, Palestinian resistance in Gaza has fired a number of rockets into Israel within minutes of the ceasefire’s expiration.According to the Israeli military, at least five rockets were fired.

Al-Quds Brigades, the armed wing of the Islamic Jihad, took responsibility for three grad rockets fired towards Ashkelon. The brigade is also reported to have targeted Eshkol with four missiles, and Kisufim with five 107 rockets.

Al-Asifah, a military wing of the Fatah faction, also claimed responsibility for targeting Ashkelon with three missiles, according to Ma’an.

Al-Quds Brigades retaliated with a shell into the Nahal’Oz Military base, across the border.

‘All the Palestinian factions, including Hamas, have agreed not to renew the ceasefire because (Israel) is refusing to accommodate our demands, but negotiations continue in Cairo,’ Hamas spokesman Fawzi Barhum declared to AFP.

Thousands of Palestinians have now fled their homes for UNRWA schools and shelters, in fear of renewed Israeli attacks.