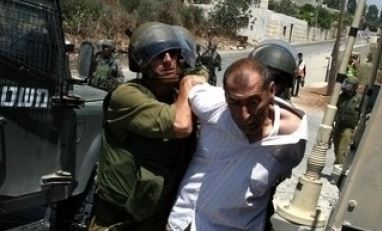 Israeli soldiers kidnapped, on Thursday, several Palestinians in different parts of the occupied West Bank. The army said all detained Palestinians have been moved to interrogation centers. Local sources in Hebron, in the southern part of the West Bank, said dozens of soldiers invaded the city, broke into and searched, dozens of homes after forcing entire families out.

The army interrogated dozens of local youth, harassing the families and their children, while their homes were being violently searched and ransacked.

Several Palestinians have been kidnapped in the city and in the Sammoua’ nearby town, where the army fired gas bombs and hurled concussion grenades into several homes causing several injuries.

Also in Hebron, soldiers invaded and searched two mosques, and conducted provocative acts against the worshippers, the Radio Bethlehem 2000 has reported.

One Palestinian, identified as Mohammad Ibrahim al-’Allamy, 17, was kidnapped in Aseeda area, in Beit Ummar town, near Hebron.

Clashes took place after the soldiers harassed and assaulted several residents in the city.

Soldiers also installed several roadblocks at the main entrances of Hebron city, held dozens of residents and interrogated them, and attacked several Palestinians.

In related news, medical sources said a child identified as Rosy Talab Jaber, 8, was injured after being rammed by a settler’s car in the city, and was moved to a local hospital.