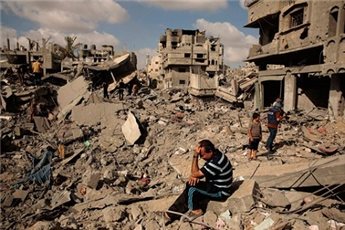 According to Ma’an News Agency, the Palestinian delegation in Cairo has told Egyptian mediators that the next three days will be the last chance for reaching a comprehensive truce agreement with Israel.
Deputy Secretary-General of the Democratic Front for the Liberation of Palestine, Qays Abu Layla, told Ma’an that, as of Thursday, all Israeli responses to ceasefire initiatives have been negative, and Israeli officials are seeking a return to the pre-war status quo.

‘The Israeli delegation didn’t bring anything new during Thursday’s meeting,’ he said.

‘They are talking about types and quantities of commodities to be allowed into Gaza, as well as merchants and other minor issues. Their response was completely negative, and so we rejected it.’

The delegation has demanded an end to the Israeli blockade, the release of re-arrested prisoners, reconstruction of Gaza, building a seaport and airport, removing the buffer zone, and enlarging the fishing zone, all of which PLO Executive Commitee member Saeb Erekat holds to be legitimate by International Law, as well as being obligations of Israel under previous agreements.

‘The Israeli delegation told the Egyptians that the airport and seaport issues are out of question, and with regards to other Palestinian demands, they brought nothing new at all,’ the DFLP official added, according to Ma’an.

Israel, in turn, has demanded that PA security be in control of all Gaza crossings, with no further discussion of details, he said, noting that Hamas would not oppose the presence of PA security personnel.

Additionally, the Egyptians have not made concrete proposals for Rafah crossing but have stated, according Abu Layla, that their priority is security.

It has been apparently suggested that some 1,000 officers of the PA presidential guard would be deployed at the crossing and along the Egyptian-Gaza border.

Demands Israel Has Accepted, And Rejected