Another Round Of Indirect Talks Ends, Gaps Still Large 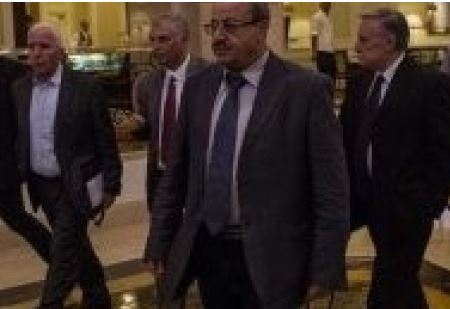 Palestinian sources have reported that a new round of indirect Palestinian-Israeli talks, mediated by Egypt, ended in Cairo with no concrete results, while the 72-hour ceasefire reaches its end by midnight, Wednesday night.The Maan News Agency has reported that a 10-hour session was held Tuesday, during which the two sides held indirect talks on various issues, including ending the aggression on Gaza and rebuilding the coastal region.

They also discussed ending the illegitimate Israeli siege, allowing the transfer of money to pay salaries of 40.000 Gaza employees, and the release of all detainees, who were released under the Shalit Prisoner Swap Agreement, and recently rearrested by Israel in the West Bank.

Israel is also holding dozens of Palestinians kidnapped by the army during the current offensive on Gaza.

While Palestinian negotiators remained in Egypt, Israeli negotiators returned to Tel Aviv for consultation with their government, headed by Benjamin Netanyahu. Another round of talks is planned for Wednesday.

Mousa Abu Marzouq, deputy head of the Political Bureau of the Hamas movement, said there are no real outcomes of talks, adding that the Palestinians are not making statements to the media, while the Israeli media is making so many conclusions, assumptions and statements.

“The Palestinian side is not talking about any outcome or details of what have been discussed”, Abu Marzouq wrote on his Facebook page, “The Israeli media seems to be suffering from a diarrhea of information despite lack of results, underestimating the Israeli stances will cause a negative, but expected, outcome”.

Speaking on condition of anonymity, a senior Israeli official told Agence France Presse that the talks have not led to any progress.

In addition, a Palestinian official told an Israeli Radio station that the Palestinian side is losing trust in Egypt as a mediator, adding that, should Israel insist on its stances, the situation could easily explode.

Israeli sources said Egypt is practicing pressure on both Israel and the Palestinians regarding extending the temporary truce to “give more time for dialogue”.