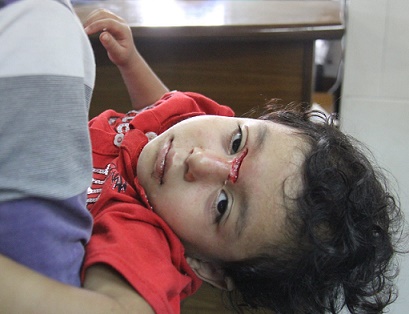 The document also refrained from mentioning anything about the allowance of a transfer of funds which would provide salaries to government employees in Gaza, while Israel insists on keeping the so-called “buffer zone” it has effectuated over time, deep into the northern and eastern areas of the Gaza Strip, on the expense of Palestinian lands, homes, farmers and workers.

The proposed plan also rejects the allowance of Palestinian fishers to fish within 12 nautical miles off the Gaza shore, and disregards the release of political prisoners while, at the same time, highlights posts as issues which are not considered a priority, and could be discussed at a later state.

Ma’an News Agency has said that the Palestinians have presented a plan for lifting the siege on Gaza, to include the following points:

1. The unified Palestinian government pays the salaries of the employees and pensioners in the Gaza Strip, and all government ministries should be allowed to operate normally.

3. Allowing the deployment of 1,000-3,000 presidential guards at the Rafah Border Terminal with Egypt.

4. Moving the conference meant for the rebuilding of Gaza, from Norway to Egypt, in order to facilitate and speed the reconstruction of the region.

5. The Foreign Ministry should be free to sign agreements with countries around the world, and to decide official relations with Latin American countries.

6. Signing an agreement between the State of Palestine and the Egyptian Republic regarding border terminals.

7. Continuance and conclusion of talks regarding the international airport and seaport which would be built in Gaza.

(This airport closed in 2001, after being repeatedly bombarded and bulldozed by the Israeli army).

Spokesperson of the Islamic Jihad Movement in Palestine, Yousef al-Hasayna, stated that he expects a comprehensive ceasefire agreement to be signed directly, after the current five-day ceasefire ends Monday, adding that any Israeli violation will be met with fierce retaliation.

Talking to the Ma’an News Agency, Yousef al-Hasayna stated that Egyptian mediators asked Palestinian negotiators to grant a 5-day truce, also implemented by Israel, to offer the chance of Egyptian teams to resolve what has been described as “technical issues”.

Al-Hasayna added that indirect Palestinian-Israeli talks managed to reach a milestone in marathon negotiations which aim to end Israeli aggressions on Gaza, as well as lifting the economically crippling Israeli siege on the coastal region.

He stated that issues which have been resolved are, in fact, facilitating the end of the Gaza siege, allowing the entry of construction supplies into the coastal region, and increasing the allotted Palestinian fishing zone.

As for Palestinian demands in regard to establishing a seaport and rebuilding the Gaza International Airport, al-Hasayna stated that all of these issues would be discussed one month after signing the official ceasefire deal.

Egypt and the United States have supposedly provided “guarantees” which ensure the implementation of the agreement, while al-Hasayna stated that the Islamic Jihad does not trust the United States, because it is “Israel’s partner in the aggression on Gaza, providing Tel Aviv with guns and money”.

“The Egyptians are providing guarantees”, he added, “but the most important guarantee is the resistance.”

He added that Tel Aviv has been trying to impose its own version of a truce, calm versus calm, “but the resistance, the steadfastness of our people, foiled this policy, and managed to become a power that counters Israel’s aggression”.

“Any violation by Israel, any attack, will be met with fierce retaliation”, the official stated.

“The siege on Gaza is an aggression, and ongoing assault, and the resistance has the right to retaliate”.