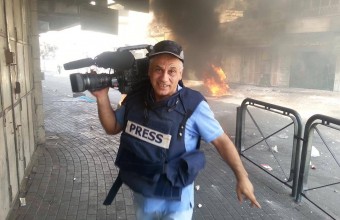 Several demonstrations have taken place all across the West Bank and in Jerusalem, on Thursday, in support of Palestinian resistance and in solidarity with the Gaza Strip. An AP cameraman was among dozens arrested.In Hebron, a march began just following Friday Prayers, upon which protesters clashed with the Israeli forces just shortly after, according to the Palestinian News Network (PNN). At least 24 Palestinians have been injured by the Israeli army — 10 by live ammunition.

Confrontations were apparently still ongoing in Bab al-Zawyah, in the center of Hebron, at the time of the PNN’s report.

Israeli soldiers fired rubber-coated metal bullets towards the cameraman of al-Mayadeen TV channel. They also arrested a cameraman from Associated Press named Iyad Hamad. Eyewitnesses report that Hamad was assaulted and subsequently abducted from Shuhada Street while covering the march.

In Bethlehem clashes were also reported to be ongoing, during which over 20 Palestinians were injured this afternoon.

In the Aida refugee camp, to the north of Bethlehem, the Israeli army raided the are firing tear gas canisters and rubber-coated bullets at the protesters.

Local sources reported that the Israeli army was preparing to spray the streets of Aida camp with ‘skunk’ water. Skunk water, upon test results, has been found to consist of, mainly, chemically treated sewage water. Fired from water canons, into the streets, the foul smelling spray leaves entire neighborhoods smelling like feces for weeks.

See link below, for video footage of this frequently used dispersal tactic.