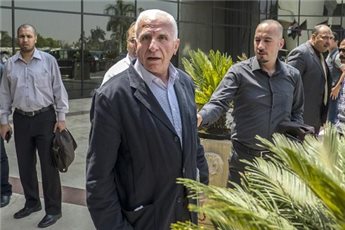 Palestinian and Israeli delegations are returning to Cairo, late Saturday, in continuance of indirect talks to reach a long-term ceasefire agreement before the current temporary truce expires at midnight on Tuesday.Head of Fatah’s delegation, Azzam al-Ahmad, told Ma’an that the negotiations session would begin on Sunday.

Additionally, sources close to the delegation said that there is a ‘real chance for … a permanent ceasefire agreement after the five-day ceasefire ends’.

Islamic Jihad officials have also said that there is a high chance for a major agreement to occur.

Palestinian demands are consistent with the terms of the Oslo Accords signed between Israel and Palestinians in the 1990s. Israel, however, has failed to abide by the agreement, continuing to insist on the ongoing narrative that democratically elected Hamas is a terrorist group.

Ma’an further reports that Israeli authorities have not directly responded to Palestinian demands but have suggested that they would be open to easing the blockade, stressing previously that a long-term agreement should include the demilitarization of the Gaza Strip.