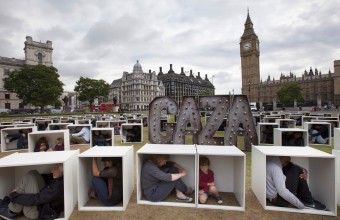 A full recovery from the humanitarian catastrophe in Gaza will be impossible, according to Oxfam, unless Israel’s blockade is lifted permanently. Oxfam recently held a demonstration in London’s Parliament Square in highlighting the suffering which the ongoing blockade causes, and has released official statements in this regard.The Palestinian News Network (PNN) reports that Oxfam, along with other members of the Disasters and Emergency Committee, is delivering urgent humanitarian aid but that notes that reconstruction efforts have not yet begun in earnest.

The need to rebuild Gaza’s destroyed civilian infrastructure alone makes it more urgent than ever to lift the blockade.

Even before the destruction inflicted on Gaza by Israel, over the past month, seven years of blockade had turned urban essentials like power, clean water, and sewage systems into scarcities.

Under the blockade, 80% of the people in Gaza are reliant on aid.

Note also PCHR’s statistics on victims of the Israeli offensive since 08 July, 2014.

The entirety of the region’s civilian population is being punished for acts for which they bear no responsibility. Such measures contsitute collective punishment and are illegal under international law.

Oxfam is now challenging the UK and international governments, says the PNN, in order to clarify what they are doing to bring an end to these crimes, noting that this the best step toward securing a lasting peace between opposing factions.

Head of Oxfam in the Occupied Palestinian Territory and Israel, Nishant Pandey, was quoted to say that: “The international community will be guilty of a dereliction of duty if it stands by and watches the blockade continue to impose further misery on Palestinians in Gaza. Israel does have legitimate security concerns, but punishing everyone in Gaza will not achieve lasting peace and security for either Palestinians or Israelis. Enough is enough – the blockade must be lifted now.”

Over the last few weeks, the world has reacted in shock as it witnessed both indiscriminate rocket fire from Gaza and disproportionate attacks from Israel which resulted in enormous civilian casualties.

*Note that default Hamas rockets are not equipped with a guidance system and basically consist of hollow tubes stuffed full of dynamite, which land mostly in unpopulated areas. Palestinians have no official army, navy or air force to speak of and PA security is heavily coordinated with that of the Israelis.

Much of Gaza has once again been turned to rubble, the PNN further reports, with over 100,000 people having had their houses destroyed and been left displaced (homeless). Gaza must be rebuilt, and for the last time.

The destruction of civilian infrastructure in Gaza is reportedly the worst Oxfam has witnessed in nearly 20 years of working in in the region. At least 15 hospitals and 16 clinics have been damaged – including four supported by Oxfam.

More than 200 schools have been damaged, with 25 completely destroyed. Gaza’s only power plant has been destroyed. Before the current crisis, Gazans were running on 8 hours of electricity per day, at best.

Wells, pipelines, and reservoirs have suffered crippling damages, leaving half of Gaza’s 1.8 million people without access to clean water and the other half receiving water only every five days.

Up to 90 per cent of the water extracted from Gaza’s aquifer is not even fit for human consumption — some residents regularly spend up to a third of their income on drinking water. The recent bombings have so severely damaged water and sanitation infrastructure that raw sewage is now spilling onto the streets and risking a health crisis.

Beyond basic humanitarian concerns, the blockade on the Strip — backed by Egypt since 2007 — has severely limited Gaza’s ability to rebuild its economy in the aftermath of the current devastation.

PNN reports that Gaza was dependent upon its exports of strawberries to UK supermarkets, flowers to the Netherlands, as well as an abundance of goods to Israel and the West Bank. Today, Israeli restrictions have cut off trade to Israel and to the West Bank – Gaza’s natural markets – and exports are at just two per cent of pre-blockade levels.

See:‘Damages on Gaza Agriculture to Have Long-term Effects on the Region’

Without access to external markets, Gaza’s once vibrant economy is now condemned to a future of aid dependency.

Nishant Pandey additionally stated: “Even before the current crisis, Gaza’s isolation was strangling its economy. There is a closing window of opportunity for international pressure to end this blockade, and the UK government should play a vital role. The people of this region deserve good news, and lifting the blockade is a necessary step toward a lasting peace between Palestinians and Israelis.”