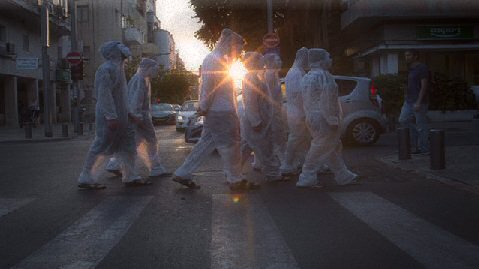 A group of Israeli activists, representing the ghosts of silent victims without faces or names, walked through the streets of Tel Aviv on August 12. Describing themselves as the “missing elements”, the activists asked questions not raised in Israel during the Gaza attack.

“We live under the rule of interests occupied with making profits for themselves”, wrote the activists, “politicians, arms manufacturers, senior military officials and media bodies. Each one of them in its way is busy with deepening our sense of fear – the more we fear, the more their profits grow”.

Adding that “Throughout the entire attack on Gaza we, the society in Israel, swallowed the answers we received via the media without any doubt’, the activists added that ‘The essential questions were not asked in these broadcasts:

Why did Israel begin the attack and what were its goals and aims? Why was the stated reason for commencing the attack changed a large number of times in accordance with achievements of the previous days?

How can it be that at least half of those killed in Gaza are not fighters (according to military statistics)?

How much money does the military industry in Israel earn from selling weapons systems following each military operation?

By how much will the defence ministry’s budget grow at the expense of budgets for health, housing and welfare for the citizens of Israel?

Why are the media, politicians and public discourse preoccupied with Israel’s weakened southern towns only during fighting while at other times they remain silent?

Will an agreement include an element such as a lessening or removing of the siege on Gaza and the passage of goods?

Why is there a siege on Gaza? Are the tunnels a product of the siege?

Could all of the attack’s “achievements” be attained in another way? Does the state of Israel understand only force?

Is it coincidental that all of the Israeli citizens killed are from weakened minority groups?
For what were over 1,000 residents of Israel detained during the days of fighting, amongst them over 200 minors?

Why does public quiet exist concerning the racist attacks against Israeli citizens?

As we march through the street we remind ourselves that we know how to ask questions. The capacity exists within us. Let’s use it to ask more difficult questions!’