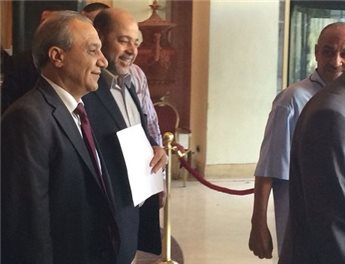 According to initial reported, negotiators, on Monday, agreed to extend the temporary truce in Gaza for another 24 hours, according to a senior Palestinian official. Head of the Palestinian team denied progress. The previous ceasefire lasted for 5 days and was set to expire at midnight, local time.

Palestinian sources in Cairo told Ma’an News Agency, earlier Monday, that a truce agreement was being finalized after 15 days of negotiations sponsored by Egypt officials, and that their legal consultants were preparing the documents.

There were no major disagreements among the Palestinian factions, according to the sources.

After Palestinian and Israeli officials managed, under Egyptian mediation, to extend the ceasefire for 24 hours, and just before the ceasefire ended, reports surfaced that the two sides had reached an “initial agreement” on certain issues.

Azzam al-Ahmad, head of the Palestinian team, said that the 24 hours would offer some chance for more indirect talks, with the hope of reaching an understanding.

Israel also confirmed the truce extension, and said that “all parties vowed to respect this temporary truce”, yet, Israeli Prime Minister, Benjamin Netanyahu, and Defense Minister, Moshe Ya’alon, along with Shabak head Yuram Cohen and Chief of Staff, Benny Gantz are still to hold a session with the Israeli negotiations team.

Senior sources in Egypt said the initial agreement includes six main points; Gaza reconstruction, lifting the siege, resolving the issue of electricity, opening all border terminals, allowing the Palestinians to fish within 12 nautical miles of Gaza waters within six months, and allowing the entry of construction material under international supervision, according to Ma’an News Agency.

According to the Egyptian report, both parties agree to delay the discussion on a number of issues for a month or even two months. Those issues are the reconstruction of the Gaza Airport, Palestinian detainees held by Israel, the agricultural zone, and the issue of remains of Israeli soldiers who were killed in Gaza.

The issue of detainees includes all former political prisoners who were released, under the Shalit Prisoner Swap Agreement, and later rearrested in the West Bank, in addition to the release of the remaining veteran political prisoners.

Yet, Azzam al-Ahmad of Fateh movement, head of the Palestinian team, said the reports are inaccurate, and that the only ‘achievement’ made was extending the truce for an additional 24 hours.

He added that some parties are placing obstacles in front of the Egyptian initiative, and that Israel is just manipulating the situation and wasting time, instead of discussing core issues.

Over 2,000 Palestinians have been killed and more than 10,000 wounded, since Israel’s assault on the region began on July 8th.