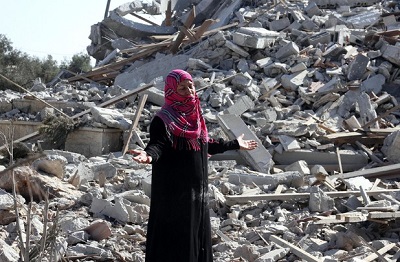 The United Nations Mideast Envoy Robert Serry told the UN Security Council on Monday that the Gaza Strip has suffered an ‘unprecedented amount of destruction’ as a result of the month-long Israeli bombardment and invasion of the coastal strip.
Serry reported that the number of homes and apartment buildings destroyed or severely damaged in the Israeli assault is 16,800. In contrast, no Israeli homes were damaged severely by Palestinian rocket fire during the month long Israeli invasion of Gaza.

Serry noted in his report that the number of homes destroyed is three times greater than in ‘Operation Cast Lead’ in 2008-9. That Operation was, at the time, the worst damage suffered by the residents of the Gaza Strip since the creation of the state of Israel on Palestinian land in 1948, when over 450 Palestinian villages and towns were destroyed and their residents turned to refugees – many of whom ended up in Gaza.

He said that once a durable truce is agreed upon, the reconstruction of the Gaza Strip must be the top priority. He noted, “Construction material must be allowed into Gaza to this effect — aggregate, bar and cement. And their access to Gaza must be facilitated.”

According to journalist Saree Makdisi, with Mondoweiss.net, who toured the Gaza Strip to see the scale of the damage, “In a month of indiscriminate bombardment, Israel has killed or injured almost twelve thousand people, including thousands of children. It has severely damaged or destroyed the homes of some 17,000 families (over 100,000 people). It has terrorized half a million people into flight from one corner of the tiny coastal enclave in which they are trapped to another, leaving them in urgent need of food assistance merely to survive. Schools, clinics, refugee shelters, hospitals, ambulances, a university campus and Gaza’s only power plant have all come under Israeli fire, sometimes repeatedly. UN schools designed to accommodate 500 people as emergency shelters have been packed with up to 3,000. The social infrastructure—already strained to its limits by years of siege—is close to breakdown. Hospitals have run low on urgent supplies including water and fuel for emergency generators. Morgues were filled; the broken bodies of Palestinian children ended up in ice-cream freezers that—in a just world—would be those same children’s sources of delight.”

Makdisi also wrote, “Israel’s repeated claim that it targets only rocket launchers or tunnels is belied by the scale and nature of the weapons it unloaded on Gaza. Its 2000-pound aerial bombs take down entire buildings along with everyone in them (almost a thousand buildings have been severely damaged or destroyed in such air strikes). Its 155mm howitzer shells have a margin of error of 300 yards and a lethal radius of up to 150 yards from the point of impact. Each of the 120mm flechette shells its tank crews fire burst into a 100 by 300 yard shower of 5,000 metal darts carefully designed to shred human flesh.”

The most seriously damaged areas are in Khuzaa, in eastern Khan Younis in the southern Gaza Strip, Sheja’eyya, in eastern Gaza, east of Gaza City near the border with Israel and parts of Beit Lahiya in the north. But every part of Gaza suffered damage in the Israeli attack, and virtually every neighborhood has some buildings that are completely destroyed.

The Palestinian Center for Human Rights called upon the UN Human Rights Council to accelerate the formation of the fact-finding mission as decided by the Council in the resolution taken in its special session that was held on 23 July 2014 to investigate violations of international humanitarian law and human rights law in the occupied Palestinian territory of Gaza, without any delay from bureaucratic restrictions and procedures.

The Security Council took no action following the statement of envoy Robert Serry.