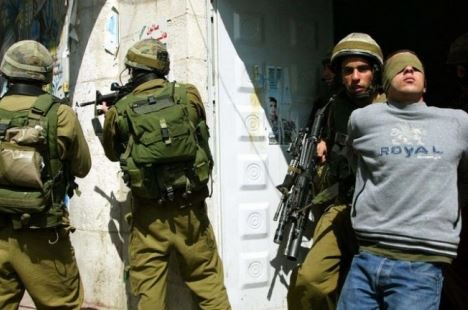 He added that the soldiers broke into several homes and ransacked them, causing property damage.
Soldiers also invaded the Tal nearby town, and kidnapped Mousa al-Hindi, 22, from his family home, also after ransacking it.

A third Palestinian, identified as Ahmad Ezzat Daghlas, was kidnapped at a military roadblock, near Borqa town, in the Nablus district.

Also on Tuesday at dawn, soldiers kidnapped resident Mohammad ‘Adel Hamamra, 23, from Husan town, after searching and ransacking his home.

The army further invaded Beit Sahour town, broke into and searched a number of homes, and handed two brothers, identified as Sami and Mohammad Taha, military warrants ordering them to head to the Gush Etzion military and security base for interrogation, south of Bethlehem.

In related news, a number of fanatic Israeli settlers hurled stones at Palestinian cars near Nahhalin town, west of Bethlehem.

The settlers came from the Beitar Illit nearby settlement, illegally built on Palestinian lands belonging to residents of Nahhalin, Husan, and Wad Fokkin area.

The car, belonging to resident Mahmoud Ali’ Atiyya, was driving on the main road leading to the town; its windshield was smashed, no injuries.

The settlers have recently escalated their attacks against the area, and repeatedly prevented the Palestinians from reaching their lands, in addition to uprooting and harvesting, the Palestinian lands in the area.

The family never received any notice or warrants from the army. The lands are adjacent to a fence installed by Israel to separate Palestinian lands from the Jabal Abu Ghneim (Har Homa) illegal settlement, built on Palestinian lands.