Dozens Abducted by Israeli Forces in West Bank and Jerusalem 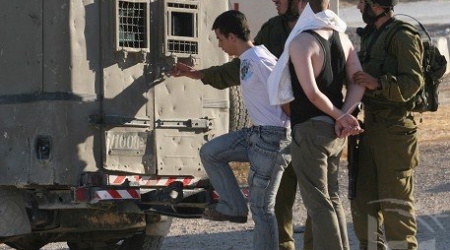 Reports of dozens of Palestinians being attacked, by both Israeli settlers and soldiers, are still surfacing in increasing amounts, as the assault on Gaza resumes with no breakthrough in peace negotiations. Over 2 dozen people have been kidnapped across the region since Monday, with housing demolitions ongoing in multiple occurrence.According to reports by media and security sources, the Israeli military and police arrested at least 16 Palestinians from various areas in the West Bank and Jerusalem, on Tuesday alone.

In occupied Nablus, the Palestinian Prisoner’s Club (PPC) said Israeli army stormed the village of Usarin, during predawn hours, abducting two teenagers, ages 17 and 19, after raiding their houses and wrecking their furniture.

The army also stormed the nearby village of Tell, where they kidnapped a Palestinian youngster, in addition to another whom they took at a checkpoint near the town of Burqa.

In Hebron, Israeli forces stormed the city and took two brothers following a similar raid on their homes. The army also stormed the nearby town of Dahiriya, where they kidnapped a 19-year-old Palestinian after raiding his house.

Meanwhile, in Bethlehem, soldiers invaded the village of Hosan, west of the city, kidnapping one youngster, aged 23, after raiding and searching his family’s house. The army further stormed the nearby town of Beit Sahour, where they served two brothers with summonses to appear, for interrogation, before Israeli intelligence.

Forces also raided the village of Deir Istiya, near the city of Salfit, where they abducted four more Palestinians.

Another was further reported arrested in the village of Burqin, to the west of Jenin, in the northern West Bank, in addition to yet another in the town of Husan, just west of Bethlehem.

In occupied East Jerusalem, Israeli police in Jerusalem took with them one minor, as he was trying to fend off a provocative Jewish settlers’ attack on al-Aqsa Mosque. The assault was led by Jewish-Israeli rabbi Yehuda Glick.

The mosque has seen repeated Israeli attempts, in recent months, to enforce a temporal division of prayer times between Muslims and Jews.

In the early morning hours, on Monday, six young men from the village of Hizma, northeast of Jerusalem, were taken into Israeli custody following a raid on their homes.

The detainees are: Mohammad Fadel Sbeih, Ibrahim Atef Masoud Khatib, Shadi Mohammad Mahmoud Najib and his brother Daoud, Rabeh Nasri and his brother Ramzi, according to the head of the local council in the village of Hizma, Mwafaq Khatib.

In the Old City, minors Omar Hasan Firawi and Ibrahim, and a young man named Thaer Assaileh were also taken on Monday morning, Silwanic has reported.

The Israel Committee Against House Demolitions says that 27,000 Palestinian homes on Jerusalem’s eastside have been demolished since 1967, when Israel first began illegaly occupying the officially recognized Palestinan territories.

On Tuesday, at dawn, Israeli forces abducted at least 16 Palestinians after raiding several areas in the occupied West Bank, according to Al Ray Palestinian Media Agency.

Israeli channel 7 reported that forces arrested one Palestinian citizen in Tulkarem, as well as four others from Deir Estia village, near Qalqilya.

Two other Palestinians were taken in Qalqilya, as well, and in the village of Burqa, near Nablus.

Two citizens from Obarn village, in Nablus, and two from Bethlehem were detianed, in addition to a Palestinian citizen who was taken from al-Zaheria town, south of Hebron.

Security sources in Hebron told the Safa news agency that Israeli forces arrested five Palestinians, in raids carried out across the province.

Israeli forces routinely carry out arrest raids in the West Bank. Around 40 percent of Palestinian men living in the occupied territories have been detained by Israel at some point in their lives, according to Al Ray.

Over 550,000 Israelis now live in Jewish-only settlements across the region, including occupied East Jerusalem, around and between Palestinian villages, where assaults on Palestinian people and their property is commonly perpetrated by both settlers and military/police.