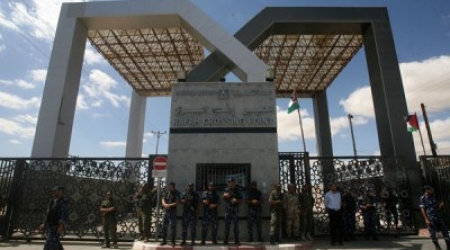 An Israeli official, Tuesday, denied a report regarding ‘understandings’ between Israel and the US, in regard to a supposed gradual lifting of the blockade on Gaza.Israeli news website Ynet cited an unnamed government official who apparently said that Israel told Washington it had agreed to incrementally remove the Egyptian-backed blockade of Gaza, first by opening the crossings and, later, additionally permitting the opening of the sea port.

The lifting of the blockade is a key demand of the Palestinian delegation, according to Al Ray Palestinian Media Agency. The demands are in line with the Oslo Accords, which Israel violated, upon the election of Hamas, who they continue to stigmatize as a terrorist organization.

The Israeli official, speaking to Channel 2 on condition of anonymity, said that no comprehensive agreement for a long-term truce has been made, and that the Israeli delegation remained in Cairo for the sake of undermine the so-called ‘Egyptian Initiative’.

Contrary to other reports, Al Ray stated that Israeli representatives have not left Egypt following an agreement to lift the blockade on Gaza, according to a senior Israeli official involved in negotiations.

Al Ray’s sources also reported that talks are still continuing over ‘core issues’, including if and how the blockade could be eased without compromising ‘Israeli security’ — a phrase which has been at the core of the Israeli narrative ever since Palestinian human rights first began being violated by the occupational regime.

Head of the Palestinian delegation, Azzam al-Ahmad, reportedly played down claims of a ‘major breakthrough’ have occured during talks.

‘If no agreement is reached, the cycle of violence will be renewed,’ he said.

The violence in Gaza continues today, with renewed airstrikes following yet another failed ceasefire.