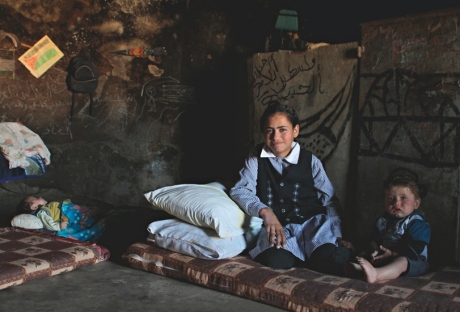 The Israeli army, Tuesday, demolished a man-made cave and shed being used to shelter a Palestinian family in al-Walja, a small village established to the northwest of Bethlehem.Ammar Abu Attin, an activist with the anti-settlement committee in the village, said that an Israeli team, accompanied by a bulldozer, stormed the area and proceeded to demolish a cave and the shed owned by a 50-year-old local resident.

The structure has been used to shelter the man and his family for 15 years, now, according to WAFA Palestinian News & Info Agency. The family has so far refused to leave the land, which Israel is attempting to take over for the benefit of settlement expansion.

The owner of the property, Abd al-Fatah Abd Rabo, says he has been subjected to the ugliest of Israeli poloicies, throughout the years, as they aim to force off his land, adding that he remained steadfast in his land and continued to live in the cave, up until forces demolished it today on Tuesday.

Over 550,000 colonial settlers now live in continually expanding developments across the region, in contravention of international laws to which Israel is signatory.

At the same time, Palestinians are rarely given building permits, as Israeli settlements continue to divide and disenfranchise Palestinian communities in massive increments. Homes and villages are bulldozed to the ground, leaving entire families displaced; agricultural establishments are damaged or destroyed entirely, turning what remains of Palestinian communities into isolated ghettos, even for those holding Israeli citizenship.

Settler violence against Palestinians and their property is common througout both Israel and the occupied Palestinian territories, often in conjunction with either the failure of police and military to uphold the law or their full-on backing thereof.

See: Children of the Occupation — Growing Up in Palestine