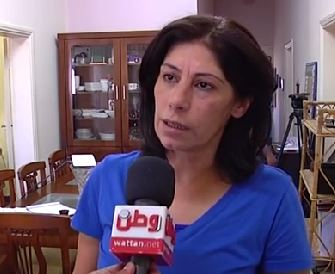 Member of the political bureau of the Popular Front for the Liberation of Palestine (PFLP), Khalida Jarrar, stated that she received a military order from the Israeli army ordering her to leave Ramallah, to Jericho, within 24 hours, the order states she won’t be allowed back home until further notice.Jarrar said she refused to sign the order, and that she intends to challenge the army by staying in her home in al-Biereh town, near the central West Bank city of Ramallah.

She said dozens of soldiers invaded her home, and informed her that the Israeli Security Devices, and an Israeli “court”, have decided to force her leave her home and head to Jericho, “where she will be deported for an undetermined period”.

Israel alleges obtaining what the ‘court’ says “intelligence information” indicating the Jarrar is a “security threat”.

She was never informed of any charges or information about the alleged “security threat”.

Halahla was imprisoned by Israel more than seven times, and spent around 9 years in Israeli detention centers and prisons.

During his most recent imprisonment, without charges of trial, Halahla went on hunger strike for 78 consecutive days, and only stopped his strike after reaching an agreement, with the Israeli Prison Authority stating that Israel will not renew his arbitrary administrative detention.

His abduction comes around three months after his release; he suffers various health issues due to extended imprisonment, torture and interrogation by Israel.