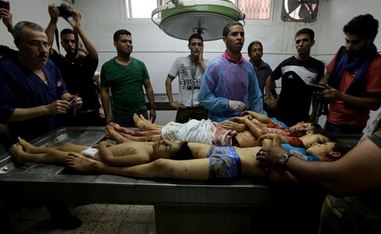 Palestinian medical sources have reported, Wednesday, that seventeen more Palestinians, including children, have been killed, and dozens injured in the resumed Israeli offensive on the Palestinians in the besieged coastal region. One died of his wounds. Update: 16:56 – The Palestinian Ministry Of Health in Gaza said two children were killed in a recent Israeli bombardment of Gaza’s Central District.

Update: Thousands of Palestinians participated in the funeral ceremonies of those killed in the ongoing Israeli bombardment that led to the deaths of more than twenty Palestinians, including the wife and child of Mohammad Deif, general leader of the al-Qassam Brigades of Hamas.

Medical sources said Widad Deif and her child, Ali, were killed when the army bombarded a home belonging to the Dalo family in Gaza, killing at least six Palestinians, including children, and wounding dozens.

Israeli media sources said the army intended to assassinate Deif, and bombarded the home despite the fact it failed to locate Deif, and did not know whether Deif was there in the first place.

The sources said that nine Palestinians, including eight family members, have been killed Wednesday, while three were killed in earlier attacks.

It said medics located the body of Ahmad Rabah ad-Dalo, 20, under the rubble of his bombarded home in Sheikh Radwan, Gaza City.

The Israeli Air Force fired missiles into the home on Tuesday at night, instantly killing two women and a 2-year-old child.

Eight family members were also killed when the army fired a missile into their home in Juhr ed-Deek, central Gaza. Their remains were moved to the al-Aqsa Hospital.

They have been identified as Mohammad al-Louh, 21, his pregnant wife Nabila Eid al-Louh, 35, and their unborn child.

The Ministry of Health also said residents Ra’fat Moustafa al-Louh, 32, and Mohammad Mustafa al-Louh, 21, have also been killed, and at least eight more Palestinians have been injured.

The latest assaults brings the number of Palestinians killed since truce talks collapsed on Tuesday to twelve, while at least ninety have been injured.

The army and its air force bombarded dozens of areas, towns, cities and refugee camps in the Gaza Strip causing a large number of casualties and the destruction of several homes.

Also, two children and one woman have been injured when the army fired a missile into a land close to the Rafah Border Terminal, in the southern part of the Gaza Strip.

The army also fired a missile into the main hall of the border terminal, and a number of missiles into nearby farmlands.

Medical sources said that six Palestinians have been injured in the Shaboura area, in Rafah, and four in Beit Lahia, in northern Gaza.

On Tuesday evening, five Palestinians, including three children, were killed when the army bombarded homes east of Rafah, the al-Maghazi refugee camp, Beit Lahia and Sheja’eyya, in central and northern Gaza.

Two, including a child, were injured when the army fired a missile into farmland, in Beit Lahia. They were moved to the Kamal ’Adwan Hospital.

Medical sources said at least 2028 Palestinians, including hundreds of children, infants, women and elderly, have been killed since July 8, and more than 10302 have been injured.