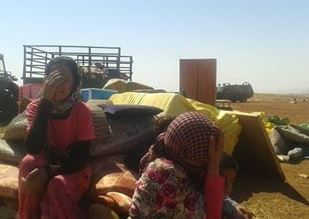 Israeli soldiers invaded, on Wednesday, several Palestinian Bedouin communities east of the Taybeh village, east of the central West Bank city of Ramallah, and the Mikhmas nearby village, and demolished several structures and tents.The Maan News Agency has reported that the soldiers demolished four sheds east of Taybeh and three others in Mikhmas area, after invading them.

The residents never received any notice or legal documents from the “Civil Administration Office”, run by the Israeli military in the occupied West Bank.

The soldiers prevented journalists from entering the area, and tried to confiscate their equipment after preventing them from even documenting the attacks, even from a distance.

Maan added that Israel is planning to remove the Bedouins from areas extending between Ramallah, the Jordan Valley and Jericho, a move meant to fully control the area, as part of the “E1” settlement project aiming at constructing and expanding illegal Jewish settlements, and connect them with what Israel calls the “Greater Jerusalem” area, in direct violation of International Law.