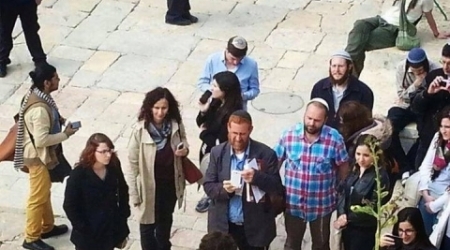 Israeli rabbi Yehuda Glick accompanied some 20 Israeli settlers in yet another invasion of al-Aqsa Mosque, on Wednesday, in occupied East Jerusalem.Protected by Israeli police, Israeli settlers stormed the mosque from al-Maghareba (Morrocan) Gate and ‘toured’ the courtyards, Al Ray reports.

Police took with them, from inside the mosque, a Palestinian student named Ibrahim Abu Arrar, for interrogation, after he and a number of other Palestinian worshipers tried to prevent the break-in.

In recent months, large groups of colonial Israeli settlers, often accompanied by Israeli security forces, have repeatedly forced their way into the complex and giving way to violent confrontations between police and outraged worshippers.

Just this past week, a similar ‘tour’ took place under the auspices of Likud party member and deputy Knesset speaker Moshe Feiglin, who was recently quoted to endorse the use of concentration camps in Gaza, amounting to direct and public incitement to genocide — a crime punishable under the Genocide Convention.

Mr. Feiglin was banned from entering the United Kingdom, following public outrage after Haaretz quoted him as saying:

For Muslims, the mosque represents the world’s third holiest site. Jews refer to the area as the ‘Temple Mount’, claiming it was the site of two prominent Jewish temples in ancient times, with pro-Israeli organizations attempting to employ the claim in securing solidarity with Western Christian churches.

Christians worldwide remain largely divided on the issue, with the majority of support for Israel’s continued policy of discrimination towards Palestinians coming from the Western evangelical sector.