Three Palestinians Kidnapped In Hebron, One In Ramallah 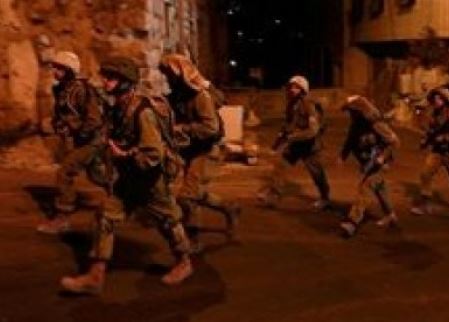 The three kidnapped residents have been identified as:

Soldiers also handed Mohammad’s other son, Ramzi, a military warrant ordering him to head to the Etzion base for interrogation.

In addition, soldiers invaded the homes of two brothers, identified as Methqal and Samir Mhanna Abu Mariyya, and resident Rasmi Sleiby, after smashing their doors, and ransacking the properties.

The army fired gas bombs, rubber-coated metal bullets, and rounds of live ammunition, into several homes and at dozens of local youth who hurled stones and empty bottles at them.

In related news, a number of fanatic Israeli settlers invaded Palestinian lands east of Yatta town, and burnt olive trees and grazing lands belonging to members of al-Makhamra family in the area.

The Ramallah office of the Palestinian Prisoner Society (PPS) said Haskour spent 11 years in Israeli prisons, and was released under the Shalit Prisoner Swap deal.

On Wednesday at night, Palestinian medical sources said a Palestinian man suffered a serious injury after being struck by a speeding Israeli settler’s car, near the Za’tara roadblock, south of Nablus.

The Red Crescent said Nimir Mohammad Abu Aisha, 32, was trying to cross the road, and that the settler fled the scene. He was moved to the Rafidia Governmental Hospital in Nablus for treatment.