Abu Khdeir Family ‘Singled Out’ for Arrest by Israeli Authorities 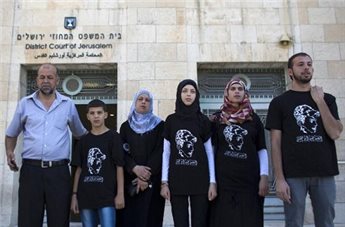 A US State Department official accused Israel, on Wednesday, of singling out for arrest the relations of Muhammad Abu Khdeir, the Palestinian teen who was tortured and burned alive last month by a group of Israeli settlers.Israeli police arrested six suspects, charging three in mid-July, while freeing the others.

The statement, according to Haaretz, follows the July 28 arrest of a US citizen and East Jerusalem resident, also named Mohammed Abu Khdeir, who was detained by police in a crackdown on riots occuring in the area.

‘We are concerned that the US consulate general in Jerusalem was not notified of his arrest by the government of Israel,’ said State Department spokeswoman Marie Harf. ‘We are also concerned about the fact that members of the Khdeir family appeared to be singled out for arrest by the Israeli authorities.’

The Abu Khdeir family, from the Shufat area of Israeli-occupied East Jerusalem, claim that no fewer than 35 members of the family have been arrested, so far, 21 of whom are still under arrest.

“From the entire village they arrested perhaps six or seven people from other families, all the rest from our family. Today it’s enough for you to have the name Abu Khdeir, and they arrest you,” said Walid Abu Khdeir, uncle of the murdered teen.

Leah Tsemel, the attorney representing the aforementioned detainee, as well as additional detainees from the Abu Khdeir family, reportedly concurs with the State Department’s suspicions.

Israeli police deny the allegation, claiming that they simply arrest and investigate anyone who displays orderly conduct.

Another cousin to Muhammad Abu Khdeir, 15-year-old Tariq, also a US citizen was brutally beaten by Israeli police during Jerusalem clashes and later sentenced to house arrest, with little more than token interest surfacing from US officials and mainstream media.

West Bank riots have been in a state of escalation since the kidnapping and killing of Abu Khdeir, further agitated by the ongoing military strikes on the Gaza Strip which have now killed over 2,000 Palestinians, over 80% of whom were civilians, including hundreds of children.