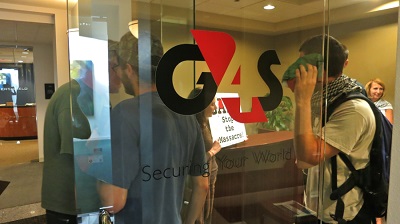 A group of Palestine supporters occupied the office of the prison and security contracting firm in Portland Oregon on Thursday afternoon, calling on the company to end its affiliation with the Israeli prison system – a system which brutalizes inmates, imprisons children in adult facilities and engages in torture.
G4S has multiple contracts with the Israeli government and military, including running several of the prison facilities which illegally imprison Palestinians without charge or trial. The company has also recently been awarded a contract with the city of Portland to provide security for several city-owned buildings, including Portland’s City Hall.

The activists billed the action as a ‘Rally Against the Profiteers: End the Occupation, Break the Siege‘, and dozens of Portlanders joined the direct action to shut down the company’s local operations for the day.

They initially occupied the company’s office in Portland, and then were forced out by security, although activists tried to pull the door to the office open to continue their occupation of the firm. After being pushed outside, police arrived on the scene and the protesters held up their hands saying ‘Hands Up, Don’t Shoot’, in a reference to the chant that has become emblematic of police violence across the U.S. following nearly two weeks of protests in Ferguson, Missouri.

In their press release following the action, the activists stated, ‘At 2:30pm, Thursday, August 21, 30+ community members gathered at the local office of G4S, a multinational security business targeted for Boycott, Divestment and Sanctions due to complicity in the illegal Israeli occupation of Palestine and siege of Gaza. Organizers delivered a set of demands (listed below) and held a rally outside G4S.

‘One local organizer stated: ‘As bombs continue to fall on the besieged Gaza Strip, we, as anti- Occupation Jews, Americans, Israelis, and other people of conscience call on G4S to heed the call of Palestinian civil society and divest from Israel until it complies with International law and the Universal Principles of Human Rights.’

‘As a private security company G4S holds contracts to provide equipment and services to Israeli prisons at which Palestinian political prisoners, including child prisoners, are detained and mistreated. G4S also provides equipment and services to checkpoints, illegal settlements and businesses within these settlements, and to the illegal apartheid wall.

‘In addition to G4S’ complicity in the occupation of Palestine, G4S is directly involved with the prison industry and immigrant detention in the United States, and human rights abuses internationally. Locally, Trimet and the City of Portland contract with G4S to provide uniformed security guards throughout the city, including at City Hall and Union Station.

‘Portland community members call on G4S to meet the demands below. Jewish American, Jonathan Irwin, 28, states, ‘Businesses that profit from human rights abuses, war, and possible crimes against humanity should have no place working for Trimet or City Hall. If G4S would like to keep its local contracts, they must pull out of Israel/Palestine and follow their own human rights policy more carefully.’

‘Maya Rotem adds, ‘As an Israeli Jew I have seen the Israeli military system that is used to oppress Palestinians and that violates human rights daily. G4S is a full accomplice in operating and maintaining this system, its checkpoints and military courts & jails. I urge G4S to sever its ties with Israel and stop its participation in the Israeli occupation and international human rights violations.’

‘Since 2011 dozens of private companies, progressive organizations and public institutions throughout the world have cancelled or failed to renew contracts with G4S in response to the call of Palestinian civil society to Boycott, Divest, and Sanction Israel; holding G4S accountable for its complicity in Israel’s illegal occupation of Palestine (www.bdsmovement.net/g4s- timeline). The City of Portland must follow the lead of these organizations and individuals concerned with human rights and terminate its $12 million contract with G4S.

The groups’ Demands presented to G4S during the action:

• Clarify and honor its prior commitments to withdraw from Ofer prison, affiliated checkpoints, and affiliated West Bank police stations.

• Immediately lay out plans to withdraw from and/or fail to renew all Israeli military, prison, and border security contracts-as well as private security contracts to Israeli West Bank settlements-over the next year (by the end of 2015).

• Review in the next two years (end of 2016) all G4S contracts throughout its 120 countries for adherence to G4S’ Human Rights Guidance policy.

In June 2014, the head of G4S announced that the company did not plan to renew any of its contracts with the Israeli government. But activists with the global Boycott Divestment and Sanctions Movement pointed out that the company has made similar statements in the past that were not followed by action.

At the time, Randa Wahbe, advocacy officer with the Addameer Prisoner Support and Human Rights Association, said in a statement to The Electronic Intifada, “G4S is certainly feeling the pressure and reputational damage caused by the international campaign against its complicity in Israel’s military occupation.

“The latest reports that G4S will not renew its contract with the Israeli Prison Service is a welcome step, but this has no immediate effect on those facing human rights violations inside Israel’s prisons today.

“G4S has a long track record of saying one thing but doing another and has not made any formal written statements about when it intends to end its contracts with the Israeli prison service and other aspects of Israel’s apartheid regime.

“The campaign against G4S will continue until it actually ends all contracts that support Israel’s military occupation.”

The Palestinian boycott committee confirmed at that time that G4S remains a target of the campaign.