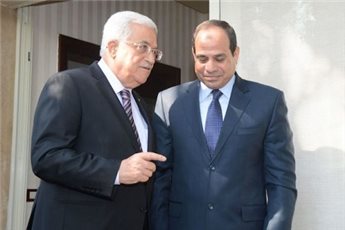 According to Ma’an News Agency, Abbas met with Deputy Secretary General Ziyad al-Nakhala and Khalid al-Batsh of the Islamic Jihad, on Friday evening, after arriving from Qatar earlier in the afternoon. The Islamic Jihad media office said that the meeting aimed to discuss ceasefire initiatives which adhere to Palestinian demands.

President Abbas had previously been in Doha, where he met with the Qatari Emir and Hamas leader Khaled Mashal, also to discuss the possibility of a ceasefire.

Earlier in the week, the Israeli delegation left Cairo with no response to a proposal offered by the Palestinian side.

Abbas is expected to meet with Egyptian president Abd al-Fattah Sisi and other Egyptian officials on Saturday.