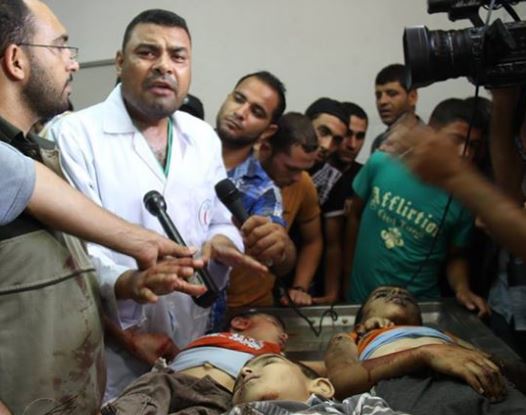 Palestinian medical sources in the Gaza Strip have reported that four Palestinians have been killed, later on Friday, and dozens injured, in different Israeli air strikes and bombardment targeting residential areas in the besieged coastal region.The army fired missiles into homes in the Zawayda area, in central Gaza, killing one woman and wounding dozens. Medics and rescue teams, along with many residents have been searching under the rubble in an attempt to locate possible survivors. The slain woman has been identified as:

Soldiers also fired a missile into a home in the Sabra neighborhood in Gaza, wounding at least 40 Palestinians, including children, women and elderly.

In addition, an elderly man has been killed, and several Palestinians injured by Israeli missiles striking the man’s farm in the Nusseirat area in Central Gaza. The slain man has been identified as

Also on Friday, a Palestinian man and his son have also been killed when the army fired missiles into al-Qarara area, in Khan Younis, in the southern part of the Gaza Strip; many Palestinians were injured. The slain men have been identified as:

The Ministry of Health in Gaza said that at least 2091 Palestinians have been killed, and more than 10500 have been injured. Most of the casualties are civilian elderly, women, children and infants.