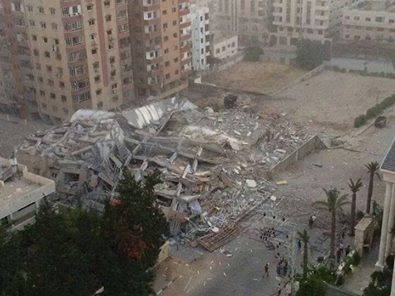 A massive Israeli airstrike in Gaza City, Saturday, leveled to the ground a building known as the al-Zafer apartment complex. Several nearby buildings were severely damaged. At least twenty-two people were badly wounded, and emergency workers are attempting to go through the rubble to find bodies and to see if there are more survivors.
In a separate airstrike, Saturday, Hussein Khaled Ahmad, 8, was killed along with his mother, Nisreen Ahmad, in an airstrike that hit their home in Deir al-Balah, in central Gaza, mid-day on Saturday.

Also in Deir al-Balah, Saturday, the body of Suheir Abu Mdein was recovered from under the rubble.

Air strikes continued in Deir al-Balah through the afternoon and evening on Saturday. One airstrike in Deir al-Balah hit the home of Abu Anwar Saliha, near Yafa mosque, but there are no reports of casualties in that incident.

Air strikes were also reported in Rafah, the area which suffered the most severe attacks in the Israeli assault on Gaza, in the few days before the temporary ceasefire was declared.

Two people were reportedly killed by an airstrike in the al-Jneina neighborhood of Rafah, but they have not yet been identified.

These attacks followed an airstrike, early Saturday morning, that hit the home of the al-Dahrouj family, killing the mother, father, their 3-year old and 4-year old sons, and the father’s aunt.

Another Palestinian died of wounds sustained in an earlier Israeli attack – he was identified as Salah Isleim.

Since Israel re-started its offensive on Gaza, Tuesday, after a week-long pause, more than 80 Palestinians have been killed and several hundred wounded, according to the Palestinian Ministry of Health.

Video of the bombing of the apartment building: