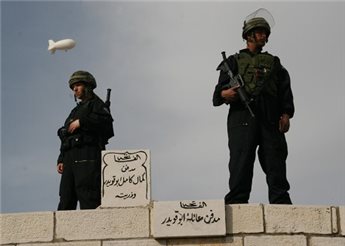 A young Palestinian man from the Shu’fat refugee camp, was hit in the abdomen by two rounds of live Israeli fire from Jerusalem police, in occupied East Jerusalem, on Saturday.Fatah movement spokesman Thaer al-Fasfous told Ma’an News Agency that fire was opened on Palestinian houses from the illegal settlmelent of Pisgat Zeev, allegedly in response to fire from Shu’fat on the settlement, between Friday and Saturday.

20-year-old Yahya Alqam was evacuated to Hadassah hospital and placed in intensive care, with Israeli officers stationed outside the room, indicating that he was under arrest.

The officers additionally questioned young Palestinian men who went to check on Alqam in the hospital, according to al-Fasfous.

Shu’fat refugee camp is located in Israeli-occupied East Jerusalem, and surrounded by the infamous ‘separation wall’.

Its 20,000 residents are among the poorest in East Jerusalem, according to Ma’an.

More than 200,000 Israelis live in illegal colonial settlements built in and around Palestinian neighborhoods in the area. Movement between the camp and neighboring areas is regulated by military checkpoints.