Mother Killed in Her Home, Along With 4 of Her Children, by Israeli Airstrike 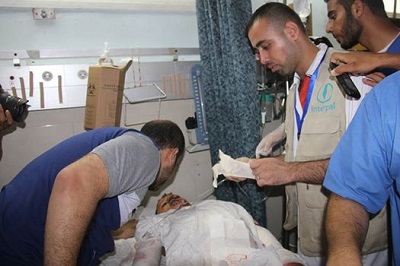 On Sunday afternoon, the Juda’ family became the latest casualties of the ongoing Israeli assault on Gaza. They are the 89th Palestinian family since July 8th to have been murdered in their home by an Israeli airstrike which killed the whole family, except for one son who was critically wounded.The family members killed in the airstrike were identified as:
Tasneem Essam Juda’, the mother of the family, and her children:
Rawiya Juda’
Raghad Juda’
Osama Juda’
Mohammad Juda’

The ages of the children have not yet been made public, but there are several children among them – one of whom whose head was torn in half by the blast, and others whose bodies were badly mutilated and torn in several pieces.

The only family member who survived the massacre is Thaer Juda’, a young boy, who remains in critical condition at Shifa Hospital in Gaza City.

The Juda’ family home was located in Tal al-Zatar neighborhood, east of Jabalia. The Israeli airstrike hit the family home with the family inside. No warning was given before the attack.

This latest family massacre has brought the death toll to 2,120, with 10,854 wounded since Israel began its assault on Gaza on July 8th. Of those killed, an estimated 75% are civilians, according to the United Nations. 68 Israelis have been killed in that time, 4 of whom are civilians.