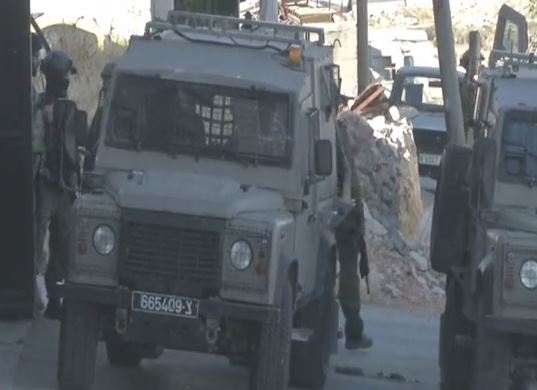 Israeli soldiers kidnapped at least five Palestinians, including two children, in a number of invasions into homes in different parts of the occupied West Bank. Clashes and injuries have also been reported. Dozens of soldiers invaded Teqoua’ town, east of the West Bank city of Bethlehem, and kidnapped a two, including a child, after breaking into and searching their families’ homes.

The two have been identified as Nassim Mahmoud Sabah, 18, and Yasin Hussein Sabah, 15 years of age.

Also in Bethlehem, soldiers invaded Husan town, west of the city, and clashed with dozens of local youths who hurled stones and empty bottles at them.

Israeli sources said a settler was injured in the head after a number of youths hurled stones at his car, along with several other settler’s cars and military jeeps. Damage to a number of cars has been reported.

In the Jenin district, in the northern part of the West Bank, dozens of soldiers invaded the towns of Jaba’ al-‘Arqa, kidnapping two Palestinians, and also invaded Qabatia town. Several homes were searched and ransacked during the invasions.

The two kidnapped Palestinians have been identified as Morad Yousef Shqeiqat, 25, and Mohammad Kamal Talal, 19.

Local sources in Hebron, in the southern part of the West Bank, said dozens of soldiers were deployed in different parts of the district, and installed several roadblocks at the main entrance of Hebron city, and several nearby communities.

The soldiers kidnapped a Palestinian child, identified as Bassem Shaher Basal, age 14, at a bypass road near Hebron, and took him to an unknown destination.

They further invaded Beit Kahel nearby town, and blocked its main road before stopping dozens of residents and investigating their ID cards, while interrogating some of them.

One Palestinian was wounded by an Israeli live round, and two by rubber-coated metal bullets, after the soldiers invaded Beit Ummar town, north of Hebron, and clashed with local youth.

Dozens suffered the effects of tear gas inhalation, especially in the area close to the Karmie Tzur illegal settlement, built on Palestinian lands.

The invasion was carried out as hundreds of residents were marching in the town, expressing solidarity with Palestinian resistance and residents in the Gaza Strip.

Soldiers also closed the main entrance of Beit Ummar, preventing Palestinians and their cars from crossing, while several soldiers also occupied the rooftop of a local home.