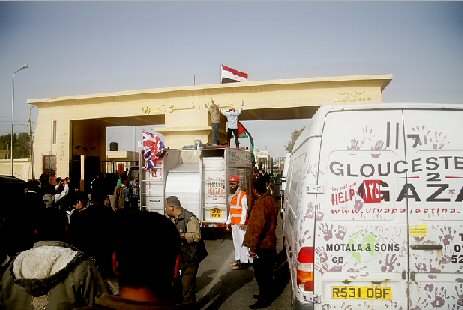 Senior Hamas leader Mousa Abu Marzouq said, Tuesday, that Israel has agreed to open Gaza crossings for humanitarian aid and construction materials.Mr. Abu Marzouq stated to Ma’an News Agency that three more Gaza crossings will be made functional, in addition Kerem Shalom and Erez crossings, which are already in operation.

With specific note to the Rafah crossing, Egyptian and Palestinian are to soon discuss necessary moves for opening the crossing permanently; the Gaza buffer zone has been removed.

Reconstruction of the region is to be discussed in Egypt next month, he added. The Palestinian national consensus government will be in charge of coordinating the task.

With regard to Gaza’s fishing industry, he said that the fishing zone would encompass 6 nautical miles into the sea, extending to 12 nautical miles by the end of this year.

Restrictions and opposition to money transfers to Gaza, including those of international agencies, for salaries for former employees of Hamas-led Gaza have been officially cancelled; negotiations concerning unresolved issues are to begin one month month from now.

Israel has also reportedly agreed to stop targeted assassinations of resistance activists. Abu Marzouq stated that a ceasefire agreement could have been reached earlier if this demand would have been met sooner.

Abu Marzouq additionally stated that the ceasefire agreement, as it was brokered by Egypt, would be monitored by Egyptian officials as well.

See: Celebrations in Streets of Gaza as Open-ended Ceasefire Announced