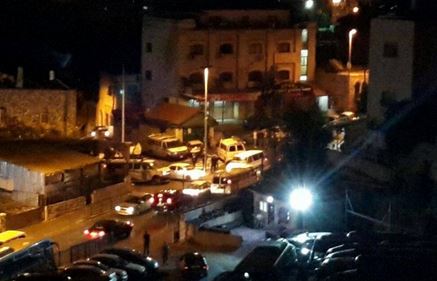 Abu ‘Asab added that the soldiers also kidnapped two Palestinians in Beit Hanina neighborhood, and three in Jerusalem’s Old City, and moved the kidnapped to the al-Maskobiyya interrogation center.

He also said that the soldiers invaded the home of former political prisoner, En’am Qalanbo, in the Old City, and kidnapped her for “participating in a march in solidarity with Gaza.

Abu ‘Asab also said that the police will almost certainly be conducting massive arrests in the coming days, especially since a truce has been reached in Gaza, adding that the soldiers are most likely to extend the extensive arrest campaigns, in order to punish the Palestinians in Jerusalem for their steadfastness in the face of ongoing assaults and home demolitions.

The Wadi Hilweh Information Center in Silwan, in occupied Jerusalem, said hundreds of Palestinians marched in different areas, while chanting for Gaza, the resistance and the liberation of Palestine, before dozens of police officers attacked them, firing concussion grenades and rubber-coated metal bullets, leading to clashes.

A Palestinian woman, identified as Hala Mahmoud Abu Sbeitan, 50 years old, was hit in the head with a gas bomb fired by the army, and was moved to a local hospital.

Dozens of Palestinians also marched in Shu’fat refugee camp, and were violently assaulted by soldiers stationed at the military roadblock by the entrance of the camp, who also fired gas bombs at them, as well as nearby homes and stores, causing several injuries.

Scores of residents were injured, while Israeli police also reported two officers had been mildly injured. At least one Palestinian was kidnapped, and many detained.