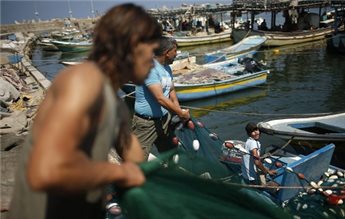 Gaza officials state that Israeli authorities have begun implementing the terms of a ceasefire agreement which went into effect early Tuesday. Israeli PM Benjamin Netanyahu declared, Wednesday, that Hamas achieved none of its goals with the truce.Palestinian officials told Ma’an News Agency that farmers were able to tend to fields within 100 meters from the border fence, suggesting that Israel’s security buffer zone has been downsized from its previous state.

Secretary-General of the Union of Fishermen, Muhammad Basala, said that Gaza fishermen have been allowed to sail as far out as six nautical miles, during recent trips.

According to the deal, they will be allowed to sail out as far as nine nautical miles, a week from now, and as far as twelve, a month from now, Basala added.

The previous restrictions, by Israel, had maintained a limit of 3 nautical miles, crippling Gaza’s fishing industry and impoverishing local fishermen, and despite earlier agreements which had settled on a 20-mile limit.

Meanwhile, Palestinian liaison officials told Ma’an that Israel had opened Erez crossing, in the northern Gaza Strip, noting that the crossing was now operating just as it did before the war.

Patients, merchants and passenger who made special coordination were all allowed to travel into Israel Wednesday, the officials said.

The long-term ceasefire agreement also includes the opening of crossings for goods and aid, albeit under heavy Israeli supervision, with Palestinian negotiators saying that this will signal the end of Israel’s crippling eight-year long blockade of the Strip.

The Israeli demand that the Gaza Strip be demilitarized was not mentioned, Ma’an further reports, and, although Israeli officials say that it will in a second round of negotiations, scheduled for late September, it is unlikely to be agreed upon by the Palestinian side.

Israeli Prime Minister Benjamin Netanyahu is apparently of a differing opinion, in regard to the outcome of the ceasefire.

‘Hamas was hit hard and got none of its demands,’ he said at a news conference in Jerusalem, Wednesday, his first comments since the ceasefire went into effect on Tuesday evening, according to AFP.

‘Hamas wanted a port and airport in Gaza, the liberation of Palestinian prisoners, the mediation of Qatar and Turkey and the payment of salaries for its employees.

‘But it got nothing…

‘Hamas has not suffered such a defeat since its creation. We destroyed attack tunnels, killed nearly 1,000 enemy combatants, including senior officials in the movement, destroyed thousands of rockets and hundreds of command posts,’ said the Israeli PM.

Other key Palestinian demands, outside of those currently being met under the ceasefire in progress, such as the freeing of Palestinian prisoners and Hamas’ demand for seaport and airport in the Strip, have yet to be negotiated.

‘We have agreed to help reconstruct the territory for humanitarian reasons, but only under our control,’ Netanyahu said.