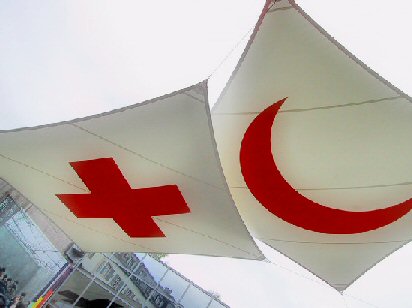 “The military operations in the Gaza Strip, in which civilians and civilian objects were attacked, has led to the displacement of around 250,000 Palestinians who now live in public and UNRWA schools-turned-shelters,” said Vice-President of the International Federation of Red Crescent and Red Crescent Societies, and President of the Italian Red Cross, Francesco Rocca, Tuesday.According to WAFA, the news was announced during a meeting with President of the Palestine Red Crescent Society, Younis Al Khatib, at the National Society’s Headquarters in Ramallah, occupied West Bank.

Al Khatib “touched on the effects of the conflict on Palestine Red Crescent Society teams, branches and ambulances in the Gaza Strip. Since the conflict began, two ambulances have been destroyed with a further 27 damaged, 46 staff have been injured and four branch offices extensively damaged,” the statement detailed.

He expressed gratitude for “the humanitarian role played by the IFRC and for the financial support it has provided through the Disaster Relief Emergency Fund which has strengthened the Society’s response and helped to meet the urgent needs of affected populations.”

Mr. Rocca additionally “commended the efforts and sacrifices made by Red Crescent’s staff and volunteers to support people in Gaza”, affirming that “the IFRC would continue to provide support and that he would convey the needs of the people to the President of IFRC, and its 189 member National Societies.”