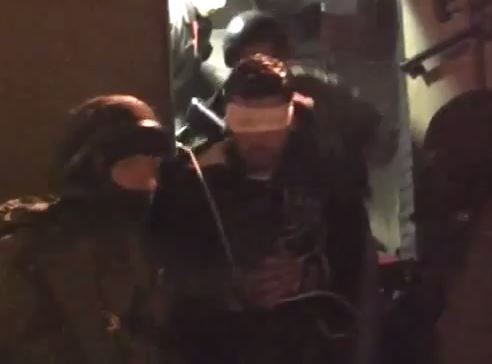 Israeli soldiers kidnapped fourteen Palestinians in various invasions targeting different communities in the occupied West Bank, and briefly detained two other Palestinians.Media sources, in the central West Bank city of Ramallah, have reported that the army kidnapped a young woman, identified as Fida’ Suleiman, 22, at the Modi’in roadblock, west of Ramallah.

Suleiman’s brothers, Khader and Ahmad, are both political prisoners, held by Israel.

Local sources in Hebron, in the southern part of the West Bank, stated that the soldiers kidnapped two Palestinians from the city, and one Palestinian in Yatta town, south of Hebron.

The kidnapped Palestinians have been identified as Husam Zghayyar, Adham Abu Hadid, from Hebron, and Ali Khaled Morr, 28, from Yatta.

In related news, soldiers removed a military roadblock that was burnt by Palestinian protesters, last Friday, in Bab az-Zawiya area, in the center of Hebron city.

The army is now replacing the roadblock with a cement and a narrow Iron Gate that only allows one person through at a time.

In addition, soldiers invaded Burin village, south of the northern West Bank city of Nablus, and kidnapped Ghassan Zeidan Najjar, 24, after searching and ransacking his home.

The army also invaded the home of Ibrahim ‘Omran, headmaster of the local high school in the town, and threatened to kidnap him “should the students continue to hold protests,’ and “continue to throw stones at settler’s cars.’

Several soldiers also broke into another home in the village, and searched it, before withdrawing.

In addition, dozens of soldiers invaded Tulkarem city, in the northern part of the West Bank, and kidnapped five Palestinians after breaking into their homes, and ransacking their properties.

In Jenin, also in the northern part of the West Bank, soldiers invaded and searched several homes, interrogated a number of residents, and briefly detained two Palestinians, before handing them military warrants ordering them to head to the Salem Military base for interrogation.

The two have been identified as Mohammad Rajab Yassin, 24, and Karim Mustafa Ghazeel, 16.