Israel Ramps Up Pressure On PFLP 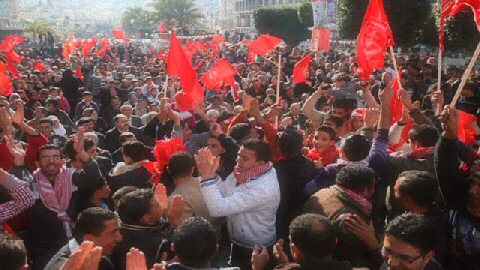 Following Tuesday morning’s detention of 12 leaders from the Popular Front for the Liberation of Palestine (PFLP), the party has declared that Israel is conducting a clear campaign against it.

The arrests took place just one day before the 13th anniversary of the assassination of PFLP general secretary Abu Ali Mustafa by Israel on 27 August 2001.

The Ma’an News Agency reports that party leaders Ahmad al-Haj Muhammad Abu al-Nimr and Zahi Khatatba were detained from their homes early Tuesday in the Nablus-area town of Furik.

In Nablus soldiers are reported to have carried out break-ins into several homes before arresting Kamal Ibrahim Abu Tharifa, Dr.Yousef Abdulhaq Abu Shaddad and Musa Salameh.

No information has been released about the arrests. It is likely that they will be put under administrative detention over the coming days.

Speaking to the Alternative Information Center (AIC), Khalida Jarrar, a Palestinian Legislative Council Member who recently received a deportation order, says this is part of a clear campaign against the PFLP. ‘They want to punish or use some kind of measures such as arresting or deporting people’ she said, to enforce a form of control in the West Bank.

Jarrar reported how dozens of soldiers raided her own home in Ramallah last week, delivering a military court-issued deportation order to Jericho on the basis of undisclosed ‘intelligence information’.

In a statement on these recent arrests and expulsion order the PFLP stated that ‘the enemy believes that if it escalates arrests across the occupied West Bank, that it will frustrate our determination and keep us from the front lines in the defence of proud, resilient Gaza against the heinous crimes of the occupier, and from confronting the attacks on Palestinian rights on the entire land of Palestine.’

Jarrar added that ‘the PFLP will continue their struggle with actions against the occupation.’

Thursday 27 August marked the 13th anniversary of the Israeli assassination of PFLP General Secretary, Abu Ali Mustafa, in his Ramallah office building, with a US-made missile, in 2001.

The PFLP state that ‘The aim (of extrajudicial executions) is to destroy our people’s leadership and their will and determination to struggle, remain, and live.’ However Khaled Barakat, Palestinian writer and activist, states to combat this ‘is to keep the legacy of our martyred leaders alive by making them immortal… commemorating the martyrs, the legacies of their struggle and their political vision.’