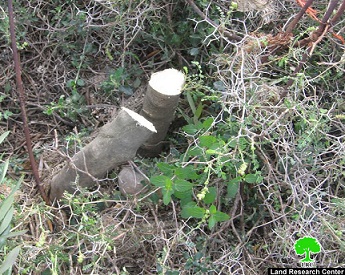 Israeli settlers, on Thursday cut down around 30 Palestinian-owned trees in an area to the north of Beit Ummar town, north of Hebron, according to a local media source.Spokesperson of the popular committee against settlement activities, Mohammad Ayyad, told WAFA Palestinina News & Info Agency that people from the illegal Israeli settlement of ‘Beit Ein, cut down around 30 olive, peach and vine trees belonging to one Hammad Islibi.

Settlers have been targeting Islibi’s land, according to Mr. Ayyad, and have cut down around 300 trees over the past five years.

Islibi’s family apparently succeeded in obtaining a court ruling whcih allowed them to put up a barbered wire fence between his land and nearby (illegally seized) settlement land, to insure non-recurrence of reprisal actions by settlers.

However, the ruling was never enforced, and Israel continues to allow such violations, while doing nothing to stop them.