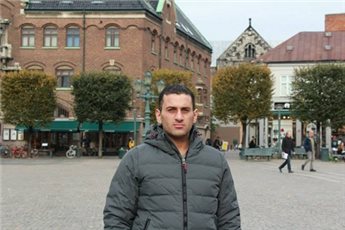 Israel has extended the detention of a Palestinian activist who was first taken into custody for political activities on Facebook, a Ma’an News Agency reporter said.The detention of Suhaib Zahida, 31, was extended, by an Israeli court in Petah Tikvauntil, until Sept. 4, folloing his arrest on Thursday for creating a Facebook page called ‘the Intifada of Hebron’, in addition to leading a campaign for a boycott on Israeli products.

Ma’an reports that Suhaib had previously participated in several nonviolent campaigns in opposition to the Israeli occupation, and was an activist within groups working against the attempted recruitment of Palestinian citizens of Israel to the Israeli military.

See related: 931 Palestinians from Jerusalem and inside Israel Taken Captive in 3 Weeks

Palestinians inside Israel have been previously detained and questioned regarding their political activities on social media, but such arrests rarely occur in the West Bank, according to Ma’an.

Israeli authorities held Palestinian-Israeli Razi al-Nabulsi, age 23, for a week in October, as a result of Facebook posts argued to constitute ‘incitement.’